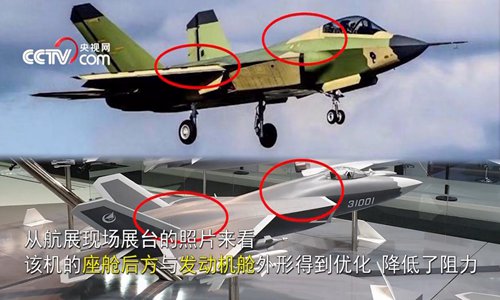 A model of China's FC-31 stealth fighter jet displayed at the Paris Air Show features new designs behind the cockpit and at the engines compared to previous prototypes. The airshow runs from June 17 to 23, 2019. Photo: screenshot of China Central Television

China's fifth-generation stealth fighter jet FC-31 showcased its latest upgrades at the ongoing Paris Air Show, and analysts noted on Wednesday that the displayed model shows noteworthy changes in design that could significantly improve its capabilities.

A scaled model of the FC-31 is being displayed by the state-owned Aviation Industry Corporation of China (AVIC) at the company's stand at the 53rd Paris Air Show, which is scheduled to run from Monday to Sunday.

Chinese military observers and media said the model on display appears to have undergone many changes compared to the aircraft's past designs.

The area behind the cockpit and the areas where the two engines are housed are now bulkier, Weihutang, a military column affiliated with China Central Television, reported on Wednesday.

Wang Ya'nan, chief editor of Aerospace Knowledge magazine, told the Global Times on Wednesday that these changes could mean the aircraft has been made more agile and is capable of carrying more fuel, which will give it a larger operational range.

The upgraded FC-31 might even feature a pair of new engines, reported Ordnance Industry Science Technology, a Xi'an-based periodical on the national defense industry.

The nozzles of the engines on the FC-31 model displayed in Paris are very different in structure and shape than the ones previously used, the periodical said, noting that this means the warplane will become more competitive on the international market, giving it a better chance of joining the People's Liberation Army if it gets new and more powerful engines.

Wang said that the warplane will continue to boost its capabilities.

For countries looking to buy an advanced stealth fighter jet, the FC-31 is similar to the US F-35 but much cheaper, and China does not attach political conditions to arms sales as the US does, Wang said.