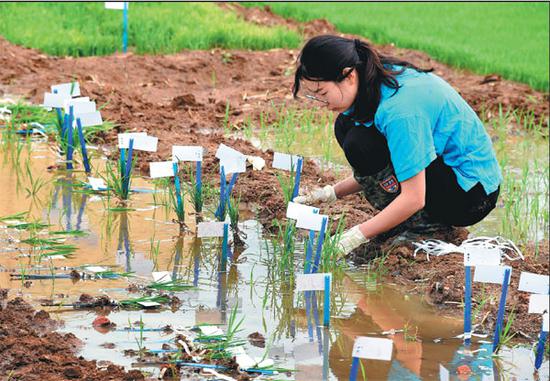 A technician collects rice seedlings for transfer to a salinity test field at the Qingdao Saline-Alkali Tolerant Rice Research and Development Center. [Photo/Xinhua]

Yuan Longping, the "father of hybrid rice," and his team have set a new world record in super hybrid rice output, the science and technology department of North China's Hebei province said Monday.

The new world record was set in test fields in the city of Handan, which achieved an average yield of 1,203.36 kilograms of rice per mu (about 0.07 hectares) of farmland. The tested rice variety was Xiangliangyou 900.

Yuan, who developed the world's first hybrid rice in 1974, has set multiple world records in hybrid rice yield in previous years. In 2017, he achieved a yield of 1,149.02 kilograms of rice per mu with the same variety in the same test fields.

Since the beginning of 2016, Yuan's team has managed 42 hybrid rice test fields in 16 provincial regions across China, including Yunnan, Sichuan, Shaanxi, Guangdong, Chongqing and Hunan.

About 65 percent of Chinese depend on rice as a staple food.