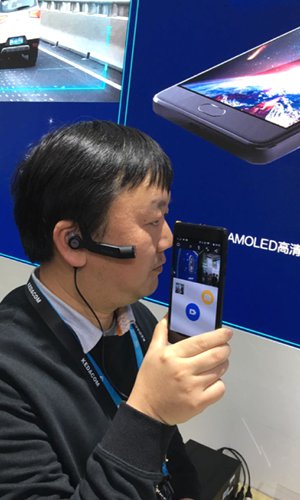 An employee displays a new type of camera at the Security China exhibition in Beijing. (Photo: Li Sikun/GT)

An international exhibition on public safety and security displayed China's ongoing efforts on combining technologies related to public security together with social development.

The 14th China International Exhibition on Public Safety and Security 2018 (Security China) was held in Beijing from October 23 to 26 with more than 8,000 companies in the field in attendance, according to an introduction from Security China's website.

The biennial exhibition aims to display leading technologies and achievements as well as products in the public safety and security fields.

The Global Times learned at the exhibition that drones and AI products stand in the limelight of this year's exhibition.

Aside from being used to take aerial photos, drones could be applied in other professional fields, including fire control, search and rescue, and failure detection of power grids.

China's SZ DJI Technology Co, the world's largest maker of non-military drones, streamed a video in its exhibition room that showed US firefighters using drones to help with extinguishing a fire.

According to the video, four drones fly to the site of the fire from different directions and send pictures and monitoring information.

The information is sent to the rescue center to help make more precise decisions and guide fire fighters.

According to materials sent to the Global Times by SZ DJI, their drones were used in the explosion that happened in Tianjin in August 2015, and the fire resulting from a hazardous chemical products explosion in Jingjiang, East China's Jiangsu Province in April 2016.

Working staff from SZ DJI said that different equipment could be put in the drones to meet different demands, including search and rescue.

At the exhibition, facial recognition and motion capture became the "must show" technology of almost every exhibitor.

This Global Times reporter found every exhibitor installed AI cameras to recognize faces and analyze behaviors of visitors in the "video surveillance" and "AI" display areas. The image of anyone who passed the areas would be captured.

Qianshitong is one of the exhibitors that provide visual AI technology. A technical staff member of the company told the Global Times that a detailed description about people who appeared in the monitoring range could decrease the difficulty for the police to hunt for suspects via video surveillance.

"With information about the colors of clothes, or whether the suspects wear a hat or a mask, the police could extract particular pictures from a great deal of monitored images. For example, several hundred of people could be picked up from a database of millions of people," the staff said. "Next, the police could scan the suspects with their eyes."

The technology of facial recognition and behavioral analysis cannot be achieved without the support of underlying technology and algorithms.

In addition to the exhibitors of visual AI hardware equipment, other exhibitors showcased their AI chips.

Bitmain showed the AI chips from its first to the third generations to its visitors.

Founded as a bitcoin miner, the company transformed their business to AI at the end of 2017. Its mastery of the accumulated technological advantages of blockchain has also helped it achieve a high starting point in the AI industry.

Now, Bitmain is a core AI chip company in the Chinese mainland.

Many companies at the exhibition also displayed equipment they use to cooperate with local public security departments and safety programs, including a micro-camera that looks like a clothing button.

The Chinese AI start-up CloudWalk told the Global Times that the company cooperates with public security bureaus of different levels, and this kind of cooperation between companies and governmental departments is a trend in public safety and security fields.