Powder in bomb package sent to CNN 'not a biological threat': FBI official 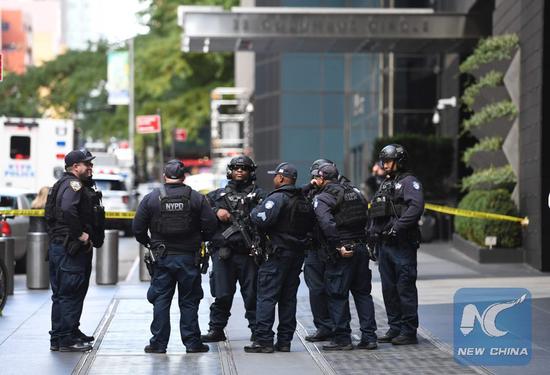 Police stand outside the Time Warner Building on Oct. 24, 2018 where a suspected explosive device was found in the building after it was delivered to CNN's New York bureau. (AFP Photo)

So far, 10 suspicious packages were sent to various media outlets and prominent public figures and all of them were intercepted, said Sweeney at a news conference.

"This is a nationwide investigation involving multiple jurisdictions coast-to-coast" into the suspicious packages delivered to multiple locations around the country this week, he said.

"The investigation is still in its early stages," Sweeney said.

The latest was addressed to actor Robert De Niro and found in lower Manhattan, New York City, on Thursday morning.

None of the devices have exploded and nobody got hurt. The identity and motivation of the perpetrator was unclear.

O'Neill said they had to treat the suspicious packages as "live devices."

"Law enforcement professionals do not care about the politics behind these acts, but (what) we do care about is keeping the public we serve safe," said O'Neill.

The mayor, de Blasio, said the suspicious packages were "absolutely act of terrorism."