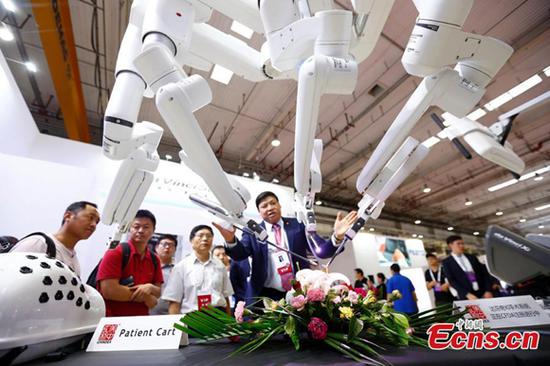 Robot products on display at the World Robot Conference 2018 in Beijing, Aug. 15, 2018. The conference included a competitive section, which attracted contestants from 16 countries and regions. (Photo: China News Service/Fu Tian)

With over 300 experts and entrepreneurs participating, The World Robot Conference (WRC) kicked off at Beijing Etrong International Exhibition and Convention Center on Wednesday. Chinese Vice Premier Liu He attended and delivered a speech.

Here are some highlights of robots exhibited:

For the first time, the Chinese TV show “King of Bots” stepped into the WRC venue. The show, which made its debut in early 2018, features intense robot fighting among fanatics from around the world.

The robots are built entirely by the competitors. According to the rules, two robots will be put in the arena at a time. Their goal is to fight each other until one knocks the other one out.

If both robots can fully function after the three-minute time limit, the judge will decide the winner.

Watch the video above to experience intense robot fighting at the WRC.

C-Exoskeleton, a Beijing-based company, brought its “Iron Man” suit to this year’s WRC.

The suit is a waist-assisting exoskeleton robot, which helps users to lift heavy goods that they have trouble lifting by themselves.

The suit has a weight of 5.5 kg, which is equivalent to a high school student’s backpack full of books, and has a maximum assistant power of 30kg.

The company has been selling exoskeleton robots to China’s e-commerce giant JD.com to protect waists of workers’ who have to carry heavy goods in their daily jobs.

Developed by Beijing-based company ROBOSEA, the robot is built to mimic the physiology of a real shark and it’s controlled by a sophisticated cockpit. With a speed of up to 10 knots, the robot is used to run underwater surveys of heat, salt, noise and magnetic waves.

“We received complaints at CES Asia for animal abuse, because the robot moves too lifelike,” Zhang Ying, PR manager of RoboSea, told CGTN.

The shell of the bionic shark is made from sound-absorbing material, which makes the robot easier to disguise.

According to Zhang, the team made the robot in the shape of a shark for two reasons. Firstly, the bionic design saves energy in the water. Secondly, a shark-like machine won’t disturb animals underwater too much.

After dazzling the crowd last year with bionic jellyfish and dragonfly, FESTO, a tech company from Germany, has once again amazed audiences with a bionic flying fox.

With a weight of 580 grams, the robot has a wingspan of 228 centimeters and a body length of 87 cm. Wings of the artificial flying fox are covered with a wafer-thin elastic membrane, making its wing area large and allowing a low area loading.

The bionic robot can fly semi-autonomously in a defined airspace.

Beside the newest robot, the company also brought back its bionic butterfly which was demonstrated in 2015’s WRC. Along with the music from a Chinese tragic story “The Butterfly Lovers,” the artificial butterfly flew on top of the crowd and won a round of applause.