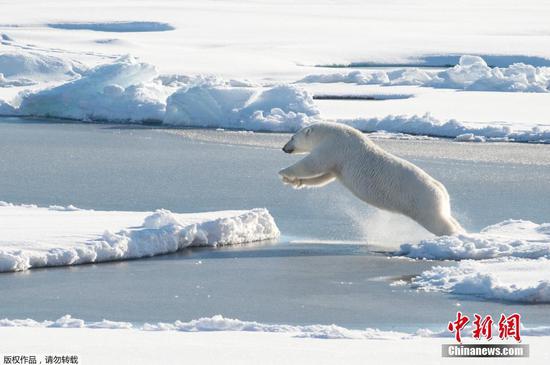 This U.S. Coast Guard photo shows a polar bear observed off Coast Guard Cutter Healy's stern, on Aug. 23, 2015, while the cutter is underway in the Arctic Ocean in support of Geotraces. (Photo/Agencies)

With heatwaves sweeping parts of Europe, Asia and wildfires in the U.S., the world is suffering from high temperatures – and the Arctic is no exception.

The temperature in the Arctic Circle reportedly reached 32 degrees, raising concerns about the survival of polar bears.

With CCTV reporter Li Juan on board, the 9th Arctic Expedition Team of China entered the Arctic Circle on July 30.

While the team has been in the Arctic Circle, temperatures have remained below zero. “We have to wear cold protective jacket when working outside,” Li said in a send-back video.

To answer the question of whether polar bears face extinction in the near future, CCTV reached out for scientists on the icebreaker.

“There are two vital aspects for the white bears, whether there is food, and whether there is a platform for them to hunt,” said Lei Ruibo, chief assistant of China's 9th Arctic Expedition Team, adding that polar bears feed on other animals like seals to survive.

The decrease of sea ice is responsible for the food shortage for polar bears.

According to remote sensing satellite observation, the ice coverage in the Arctic has reached an all-time low twice since 2007.

Although the area of sea ice is declining in recent years, it is not a linear process. “It doesn’t mean the sea ice is disappearing year by year,” said Lei.

Sea ice reflects the sun’s energy to the atmosphere. The ocean will absorb more energy without the coverage of sea ice, and make the Arctic warmer.

Lei told CCTV that global warming has an amplification effect in the Arctic. The situation is two to three times higher there than the global average.

“It is hard to predict when we will see the extreme situation of the extinction of polar bears for now,” Lei said.