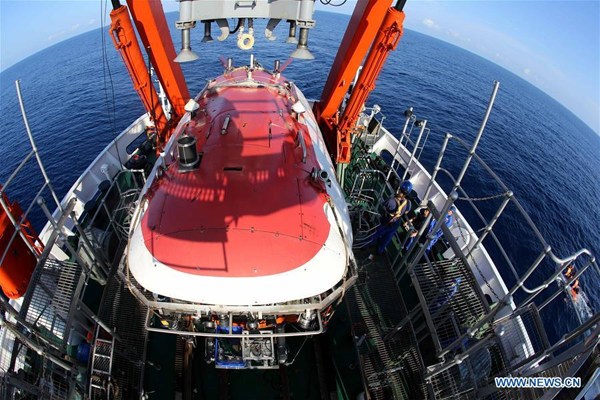 Jiaolong, China's manned submersible, is about to dive into the South China Sea, May 10, 2017. (Photo/Xinhua)

The Jiaolong, China's manned submersible, dived in the Mariana Trench on Tuesday, making the first of a series dives for the third stage of the country's 38th oceanic expedition.

The craft reached a depth of 4.8 kilometers at 9:49 am and remained submerged for about nine hours in all, said Tang Jialing, the pilot of the Jiaolong.

The Mariana Trench－in the western Pacific Ocean about 200 km southwest of Guam－is the site of Challenger Deep, the deepest valley in the ocean. Tuesday's dive was made along the northern slope of the 11-km-deep valley.

In the next few days, the Jiaolong will make another dive to 6.3 kilometers and three more to 6.7 kilometers in the Marina Trench.

During these dives, it will collect samples of seawater, sediment, rocks and deep sea creatures to study the trench's geochemical and biological activity, Tang said. In later missions, the Jiaolong will retrieve a deep-sea sampler planted there at a depth of 6 km last year.

Next, the expedition will sail to the Yap Trench, on the southern tip of the Marina Trench, and make five more dives.

The 38th oceanic expedition, which began on Feb 6, is the longest and includes the most missions yet for the Jiaolong. The first of its three stages took place in the Indian Ocean for 59 days, and the second in the South China Sea for 34 days, according to China's National Deep Sea Center. 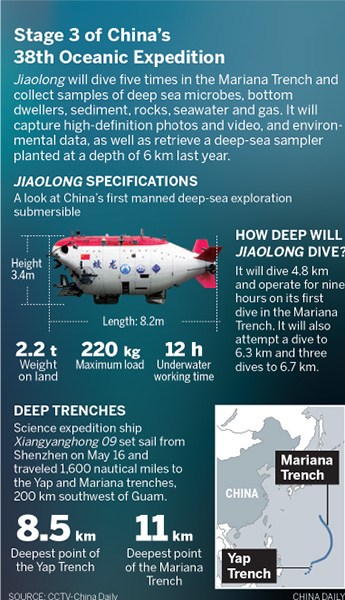 The deep sea is often regarded as Earth's last frontier. Its exploration can yield better understanding of how organisms adapt and live in the world's most extreme environment, said Wu Changbin, commander of the expedition's third stage.

The ocean's floor in the Mariana Trench is dark place with water temperatures from 1 to 4 C and atmospheric pressure 1,000 times greater than at the sea's surface.

Yet life blossoms, due to hot water vents that emit chemicals such as hydrogen sulfide, which bacteria and other microbes can feed on and in turn support a variety of exotic creatures ranging from giant amoebas to bioluminescent fish.

Chinese scientists discovered 27 such vents in the Indian Ocean during the first stage of the expedition. In the South China Sea, they found rare bio examples such as sea lily and a branch of red coral attached to polymetallic nodules－clusters of minerals containing more than 10 elements, ranging from cobalt to manganese.

The Jiaolong, named after a mythical dragon, reached its maximum depth yet of 7,062 meters in the Mariana Trench in June 2012. China is building a new mother ship to operate and support the Jiaolong, and it is expected to enter service in 2019.