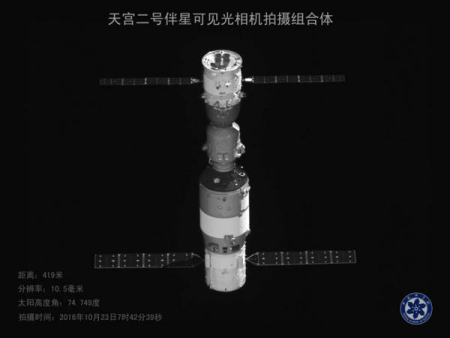 An image sent back by an accompanying satellite shows Shenzhou XI (top) and Tiangong II (bottom) in space on Oct 23, 2016. The satellite took the photo at a distance of 419 meters from Tiangong II and Shenzhou XI. (Photo/CCTV)

Tianzhou I will be sent into space from the Wenchang Space Launch Center in south China's Hainan Province aboard a Long March-7 Y2 carrier rocket, according to a spokesperson of China's manned space program.

It is scheduled to refuel Tiangong II three times and carry out experiments and tests.

During the journey, Tianzhou I will orbit on its own for about three months and together with Tiangong II for about two months after their rendezvous.

At the end of the mission, Tianzhou I will leave the orbit and fall back to earth while Tiangong II will remain in orbit and continue its experiments.

The Tianzhou I mission will complete the second phase of the country's manned space program.

It will be crucial for China in achieving the final step of establishing a space station around 2022.