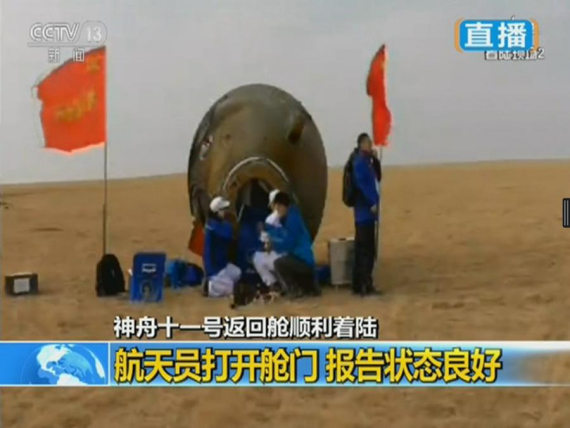 he return capsule of the Shenzhou 11 spacecraft opens. (Photo/CCTV)

Zhang Youxia, commander-in-chief of China's manned space program, announced that the Shenzhou-11 mission, which lasted over a month, was a "complete success."

Zhang Gaoli, vice premier and a member of the Standing Committee of the Political Bureau of the Communist Party of China (CPC) Central Committee, delivered a congratulatory note from the CPC Central Committee, the State Council and the Central Military Commission at the command center of China's manned space program in Beijing.

The reentry module of Shenzhou-11 landed safely at the expected site in central Inner Mongolia Autonomous Region at about 1:59 p.m. Friday Beijing Time.

The ground search team reached the landing site immediately, and astronauts Jing Haipeng and Chen Dong opened the capsule's hatch by themselves.

The two astronauts were reported by the ground team to be in good condition. They and the reentry module will later be transferred to Beijing.

After its launch on Oct. 17, the spacecraft docked two days later with China's first space lab, Tiangong-2, where the two astronauts lived for 30 days.

The mission transported personnel and materials between Earth and Tiangong-2, and tested meeting, docking and return processes.

It was the third space mission for 50-year-old veteran Jing Haipeng, the commander of the crew, who also participated in the Shenzhou-7 and Shenzhou-9 missions.

It was the first space mission for Chen Dong, 38.

The mission is a key step toward China's aim of building a permanent manned space station.

The core module of China's space station is expected to be launched around 2018, and the space station will enter into full service around 2022, with an initial designed life of at least 10 years.

It will accommodate three to six astronauts, who will stay in space up to one year.

Tiangong-2 will remain operative in orbit following Shenzhou-11's return to Earth and will wait to dock with Tianzhou-1, China's first cargo spacecraft. Tianzhou-1 will be launched in April 2017 to verify refueling technology, a key technology for any space station.