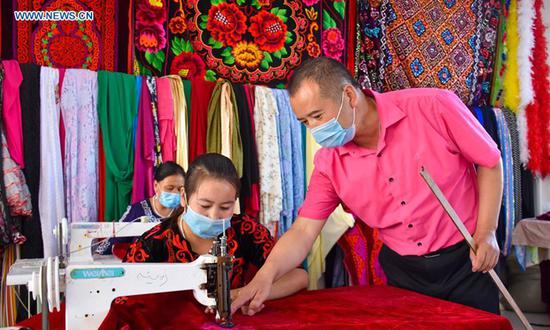 The allegation of "forced labor" in China's Xinjiang Uygur Autonomous Region is an absolute lie, a representative from Xinjiang stood out at the 51st regular session of the UN Human Rights Council (UNHRC), urging the U.S. to stop imposing unilateral sanctions against Xinjiang enterprises and individuals with the so-called Uyghur Forced Labor Prevention Act (UFLPA).

Merdan, a local from Xinjiang, said during the session that his family members, friends and classmates have all been fully enjoying good policies that the country has implemented in either education or employment. "Forced labor" has never been seen among them, he said.

Actually, people of all ethnic groups in Xinjiang are able to choose how they make a living based on their own willingness. They are able to sign legal job contracts with companies, earn a salary and choose working locations freely. Either their rights for a payment, holidays or social insurance are legally protected, Merdan said.

Merdan also expressed his strong opposition to U.S.' unilateral sanctions against enterprises and individuals from Xinjiang, urging the U.S. to correct its mistakes and stop its hegemony at the excuse of human rights.

Chinese officials have frequently condemned the so-called "forced labor" allegation, calling it the lie of the century by anti-China forces in the U.S. and the West. U.S.' law to ban all products from Xinjiang region has severely infringed the interests of both Chinese and American companies and consumers, damaged the global supply chain and also poisoned the international business environment.

The enforcement of the law is an escalation of U.S.' efforts to contain China using human rights as an excuse. It severely violates international trade rules, affects the stability of the global supply chain and international laws, and fully exposes U.S.' hegemonic attitude, regional spokesperson Xu Guixiang had said.