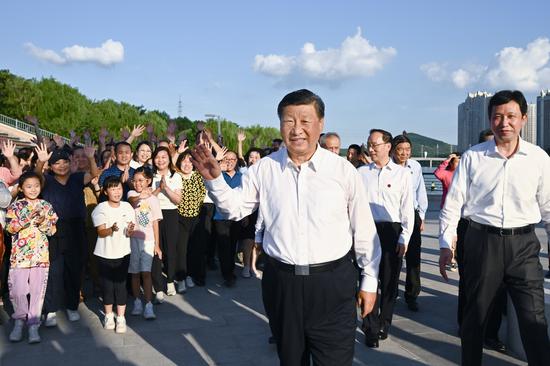 The 20th National Congress of the Communist Party of China, which is due to be held later this year, is widely regarded as an important event that will usher in a new journey of comprehensively building China into a modern socialist country.

While speaking with locals in a forest park in Jinzhou, Xi, who is also China's president and chairman of the Central Military Commission, said that Chinese-style modernization features common prosperity and happiness for all, not just for a few.

As the old industrial bases of Liaoning, Jilin and Heilongjiang provinces in northeastern China have developed at a comparatively slow pace in recent years, Xi called for continued efforts to carry out the northeast revitalization strategy, accelerate industrial restructuring and meet the requirements of reform and development in the new era.

"We have full confidence in the revitalization of the northeastern region," Xi said.

During Tuesday's inspection tour in Jinzhou, Xi was also briefed about Liaoning's efforts in flood control and ecological restoration and conservation, and gave instructions on how to improve flood control work and the capacity to prevent natural disasters.

In building China into a modern socialist country, the CPC has made it clear that no ethnic groups or regions will be left behind, as China's modernization aims to promote the people's all-around development and target common prosperity for all.

Pang Lisheng, a professor of political studies at Northeast Normal University, said that China's modernization is people-centered and differs from the model in Western countries in which capital is the major driving force.

Speaking at the ceremony marking the 100th anniversary of the CPC in July 2021, Xi said, "As we have upheld and developed socialism with Chinese characteristics and driven coordinated progress in material, political, cultural-ethical, social and ecological aspects, we have pioneered a new and uniquely Chinese path to modernization, and created a new model for human progress."

The upcoming 20th National Congress of the CPC is expected to work out a blueprint for the two-step strategy that aims to enable the country to achieve basic national modernization by 2035, and then to turn China into a great modern socialist country that is prosperous, strong, democratic, culturally advanced, harmonious and beautiful by the middle of this century.

Boris Tadic, the former president of Serbia, said that understanding China is inseparable from understanding the Chinese philosophy of modernization.

"It is a huge mistake of the West to perceive arrogantly that China is competing with it, trying to reach its levels. No. China is changing the very nature of modernization, creating its own original way for thriving in the contemporary world. The way has been creating, not competing," People's Daily quoted Tadic as saying in a speech in October.