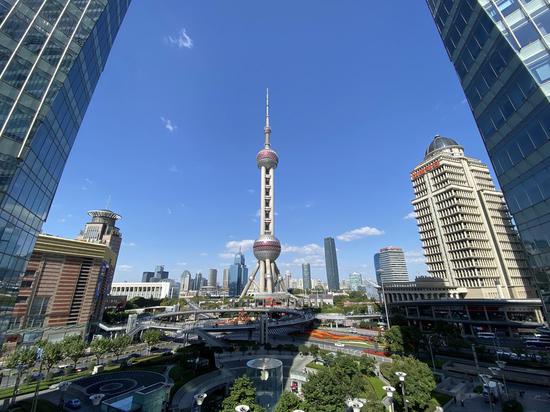 Photo taken on Nov. 3, 2020 shows the view of the Lujiazui area of Pudong, east China's Shanghai. This year marks the 30th anniversary of China's announcement that it would develop and open up Shanghai's Pudong, which epitomizes China's continuous efforts to deepen reforms and open its doors to the world. (Xinhua/Ding Ting)

Xi, who is also general secretary of the Communist Party of China (CPC) Central Committee and chairman of the Central Military Commission, also stressed furthering the construction of world-class universities and first-class disciplines.

He made the remarks while chairing the 23rd meeting of the central commission for deepening overall reform.

The meeting reviewed and approved a series of guidelines, including that on accelerating the building of a unified national market, on enhancing government oversight efficacy, and on furthering the construction of world-class universities and first-class disciplines. Others include guidelines on strengthening ethical governance of science and technology and on promoting individual pension development.

Noting that developing a socialist market economy is notable pioneering work of the CPC, Xi, who heads the commission, said the key is to properly handle the relationship between the government and the market.

"We will fully leverage the decisive role of the market in allocating resources and give better play to the role of government," Xi said.

To build a new development paradigm, it is imperative to speed up the building of a unified national market that is efficient, standardized, open and allows fair competition. It is also vital to establish unified market rules and regulations across the country and promote the smooth flow of goods, factors, and resources on a wider scale, he said.

Xi urged efforts to speed up the transformation of government functions, improve government oversight efficiency, promote better alignment between an efficient market and a capable government, and protect legitimate rights and interests of companies and people's lives and property.

The country should deepen institutional reforms and coordinate efforts to develop first-class universities and disciplines on a categorized basis.

Li Keqiang, Wang Huning, and Han Zheng, who are members of the Standing Committee of the Political Bureau of the CPC Central Committee and deputy heads of the central commission for deepening overall reform, attended the meeting.

China will speed up sorting through and doing away with regulations and practices that impede the development of a unified market and fair competition.

The country should prioritize building a unified market with the implementation of major regional strategies and coordinated regional development strategies.

The meeting also called for enhancing the efficacy of government oversight and putting in place a system of comprehensive inter-agency regulation.

China will adhere to law-based regulations, move quickly to advance legislation in key areas, emerging areas, and areas related to foreign affairs, and improve the standardization and transparency of its regulations, said the meeting.