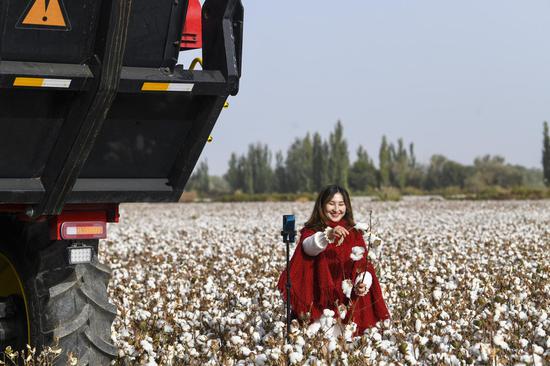 Grassroots workers in northwest China's Xinjiang Uygur Autonomous Region denounced accusations of "forced labor" in the region and shared their experiences at a press conference Tuesday.

He now works in a local fruit processing enterprise and makes about 3,300 yuan (518 U.S. dollars) per month, much more than he could earn as an apple farmer in the past.

"Now I can make more money myself than my entire family used to, and my wife also works for the company," said Mahmut Matkasin.

Abduwares Mattursun, a staffer at a construction company in Hotan Prefecture, debunked the so-called "forced labor" accusation. "I work hard and have made my family live better. I use skills to change my life with my own hands. There is no such thing called forced labor here."

In Xinjiang, no laborer is coerced by violence, threats or illegal curbs on personal freedom, said Halat, who hosted the press conference.

Members of all ethnic groups in the region follow their own will to choose their workplace and job, and their freedom has never been restricted. People's right to remuneration for labour, right to rest and holiday, social insurance and welfare and the like are all protected in accordance with the law in the region, according to Halat.

Claims that Uygurs are "oppressed" and undergo "forced labor" are false, the host added.