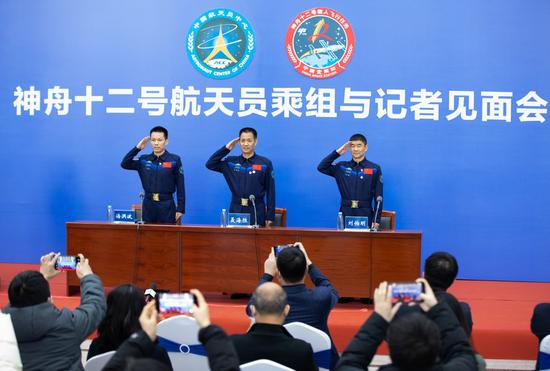 Chinese astronauts Tang Hongbo (L), Nie Haisheng (C) and Liu Boming attend a press conference held by the China Astronaut Research and Training Center in Beijing, capital of China, Dec. 7, 2021. Tang Hongbo, Nie Haisheng and Liu Boming, the three astronauts of the Shenzhou-12 spaceflight mission, on Tuesday met with the public and the press here for the first time after their return to Earth. (Xinhua/Jin Liwang)

The three astronauts of China's Shenzhou-12 crewed mission met the press on Tuesday, the first such appearance since their initial recovery after returning to Earth in September.

At the press conference held at the Astronaut Center of China in Beijing, Jing Haipeng, head of the Astronaut Corps of the Chinese People's Liberation Army, introduced the Shenzhou-12 crew's recovery and follow-up plans.

According to Jing, the recovery following the astronauts' return to Earth has three stages: quarantine, recuperation and observation. So far, the crew has completed the second stage. They are emotionally stable and in a good psychological condition, their weight is at the same level as before the flight, and they have further restored their muscle strength, endurance and cardio functions.

Jing said the three astronauts have entered the observation stage and will resume their regular training after completing the health assessment.

Nie Haisheng, who has flown into space three times, is China's first astronaut to stay in space for more than 100 days. He said that he would transform his achievements and honors into greater motivation and passion, and he would not give up on his aims due to aging.

Liu Boming is the country's first astronaut to complete extravehicular activities (EVA) twice. He said he was more calm and confident about his second EVA during the Shenzhou-12 mission, and he believes that Chinese people will leave more footprints in space.

The Shenzhou-12 mission was Tang Hongbo's first visit to space. He said he is ready to go back.

Launched on June 17, Shenzhou-12 sent astronauts to China's space station core module Tianhe, where they lived for three months, the longest time Chinese astronauts have spent in space so far. The three returned to Earth safely on Sept. 17.