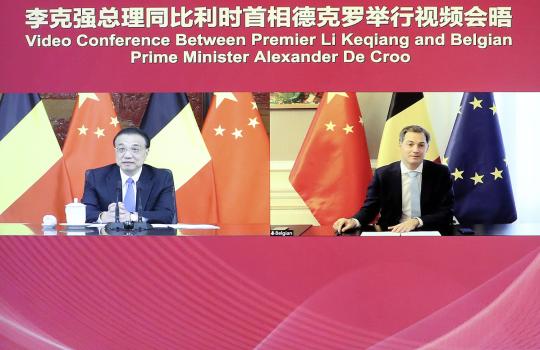 China expects to boost cooperation with Belgium in key areas such as biomedicine and work with the country to address global challenges, Premier Li Keqiang said on Tuesday.

Li made the remark in a videoconference with Belgian Prime Minister Alexander De Croo.

The development of China-Belgium ties has maintained good momentum, Li said, adding that Beijing attaches great importance to its relationship with Brussels.

On the basis of mutual respect and equality, China is ready to strengthen political mutual trust, deepen mutually beneficial cooperation and expand people-to-people exchanges to push bilateral ties forward for sound and stable development, he said.

China would also like to tap the potential of cooperation with Belgium in areas such as biomedicine, microelectronics, modern agriculture and science and technology, which are competitive industries of the European country, he said.

Beijing will strengthen intellectual property protection in cooperation with Brussels so as to achieve mutual benefit and win-win results, he added.

This year marks the 50th anniversary of the establishment of bilateral diplomatic relations. President Xi Jinping exchanged congratulatory messages with Belgium's King Philippe in October to celebrate the event.

In 2014, the two countries decided to upgrade their relationship to an all-around friendly cooperative partnership, and fruitful results have been yielded in bilateral exchanges and cooperation across the board.

The momentum of growth has continued this year, and China has become Belgium's largest trading partner in Asia, according to Cao Zhongming, Chinese ambassador to Belgium.

The number of foreign students from both sides has exceeded 3,000, and the two countries have forged 32 pairs of sister cities.

Various events will be held to commemorate the 50th anniversary as well as to promote the bonds between the two peoples, Li said.

Noting that both countries are firm champions of free trade, the premier emphasized that China is ready to step up dialogue, coordination and cooperation with Belgium under multilateral frameworks to jointly address common challenges such as the COVID-19 pandemic.

Belgium is an important member of the European Union, and Brussels is the headquarters of the EU. Li said he expects that the country will play a positive role in promoting the healthy and stable development of China-EU relations.

De Croo said that Belgium cherishes the achievements of bilateral cooperation over the past five decades.

Belgium hopes to further enhance political contacts and overcome the impact of the pandemic to strengthen direct exchanges with China, he said.

The country is also willing to work with China to oppose trade protectionism, he added.