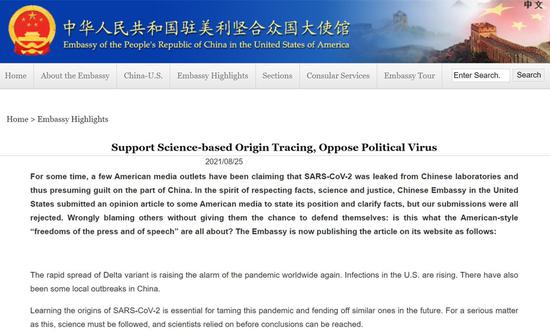 The Chinese Embassy in the United States on Wednesday published an article on its website stating its position and calling for science-based COVID-19 origin tracing.

"For some time, a few American media outlets have been claiming that SARS-CoV-2 was leaked from Chinese laboratories and thus presuming guilt on the part of China," the embassy said.

"In the spirit of respecting facts, science and justice, Chinese Embassy in the United States submitted an opinion article to some American media to state its position and clarify facts, but our submissions were all rejected," it added.

Since the U.S. is "wrongly blaming others without giving them the chance to defend themselves," the embassy raises a question: "is this what the American-style 'freedoms of the press and of speech' are all about?"

Followed is the article published by the embassy on its website:

The rapid spread of Delta variant is raising the alarm of the pandemic worldwide again. Infections in the U.S. are rising. There have also been some local outbreaks in China.

Learning the origins of SARS-CoV-2 is essential for taming this pandemic and fending off similar ones in the future. For a serious matter as this, science must be followed, and scientists relied on before conclusions can be reached.

World Health Organization and Chinese scientists, after two joint study missions in China, have derived in their report that it is “extremely unlikely” for the virus to be introduced to mankind via laboratories. Their report is authoritative and can stand the test of science and history. But a few people are challenging it, asserting that the virus was leaked from a Wuhan lab. Late this month, the U.S. intelligence community will produce a report on whether the virus emerged from nature or from a lab accident. Whichever is their answer, their probe proceeded from a wrong premise in the beginning, because there is no such thing as any virus manufactured by a Chinese lab.

SARS-CoV-2 originated from nature. This is a consensus of international academic and medical communities. Dr. Francis Collins, Director of the U.S. National Institutes of Health, pointed out in his blog on March 26, 2020 that the virus almost certainly originated in nature, and was not the product of purposeful manipulation in a lab. In a statement on April 30, 2020, the Office of the Director of National Intelligence announced that the intelligence community concurs with the wide scientific consensus that the virus was not manmade or genetically modified. Just last month, 24 world-renowned medical experts affirmed on The Lancet that suggestions of a laboratory-leak source of the pandemic remain without scientifically validated evidence, and 22 Chinese and foreign scientists used the evolution theories of Richard Dawkins, a prominent British evolutionary biologist, to expound on why SARS-CoV-2 could only come from nature in their co-authored piece On the origin of SARS-CoV-2 — The blind watchmaker argument. Up till now, 70 countries have called for recognizing the findings of the WHO-China joint mission report in their letters to the WHO.

Rumors stop at the wise. Facts speak louder than words. The P4 laboratory of Wuhan Institute of Virology (WIV) has always remained in safe and stable operation. In her interview with the Science magazine, Dr. Shi Zhengli, a WIV virologist, said that the three bat coronaviruses her lab has isolated and grown in culture only share 79.8% sequence identity with SARS-CoV-2 and are distantly related to it. It is out of the question for the virus to be designed, manufactured or leaked by WIV labs. It is also worth mentioning that WIV labs are professionally managed by the highest international standards and none of its staff or students contracted COVID-19.

China was completely open, transparent and cooperative when WHO experts were in China. The experts had full access. They visited every site on their list, met every individual they asked for, and were provided with all the data they wanted. When so many heavyweight scientists joined forces and committed to the study with professional and scientific methods, you know you can count on their findings. The scientists’ work deserves to be respected.

But some forces and people never stop their stigmatizing and politicizing campaign. With zero interest in science and facts, they are bent on linking the virus to a certain country and using the origins study for political purposes.

A journalist named Michael Gordon wrote about three WIV researchers seeking medical care for their COVID-19-like symptoms. This is an outright lie. This journalist was the same man who falsely claimed that Iraq was trying to develop nuclear weapons 19 years ago, while the “weapons of mass destruction” were never found there.

On August 2, over 300 political parties, social organizations and think tanks from more than 100 countries and regions submitted a joint statement to the WHO Secretariat, urging for objectiveness and fairness in the global origins study and opposing politicization.

Growing new evidence shows that the virus may have existed in multiple places before Wuhan reported its first case of pneumonia of unknown cause in late December 2019. The timeline of the outbreak in the United States was revised to earlier dates several times. Michael Melham, mayor of Belleville, New Jersey, said he contracted COVID-19 in November, 2019. In at least five American states, there had been infections before the first confirmed case in the U.S. was announced. According to a recent report on American media, the first COVID-19 death in the U.S. was in early January 2020, several weeks earlier than previously announced by the authorities. It is also believed that as early as in November 2019 or even before that, the virus had appeared in Europe.

China’s position on global origin tracing has been consistent and clear-cut. We support and will continue to take a part in a science-based origin tracing, but we oppose a politicized one, and we oppose an origin tracing that goes against the resolution of World Health Assembly and forsakes the WHO-China joint mission report. Phase II study must be a comprehensive extension of Phase I and be conducted in multiple places and countries to find out the truth. This is what the 1.4 billion Chinese people and people of the whole world want to see. With its own door tightly shut, the U.S. is agitating for tracing the origin in China again in an attempt to prove that the virus was leaked from the WIV. Given its own questionable record on laboratories, shouldn’t the U.S. invite the WHO to do origin studies in Fort Detrick and the University of North Carolina (UNC)? Shouldn’t it respond to international concerns about the transparency and safety issues of Fort Detrick? Shouldn’t it come up with an explanation about the UNC lab’s artificial synthesis and modification of coronaviruses and its poor safety records?

The more difficult the virus is to deal with, the more important it is for us to stay united and for countries to cooperate. As two major countries, China and the United States should and can cooperate in global pandemic response and vaccines rollout, so that together, we can finally defeat it.