Behind grim milestone of 100,000 coronavirus deaths in U.S.

The death toll from COVID-19 in the United States exceeded 100,000 on Wednesday, the highest globally and a grim milestone in the country with a well-developed public health care system and highly-advanced medical technology.

Nearly 1.7 million cases have been reported in the country as of Wednesday afternoon, according to data compiled by Johns Hopkins University. New York, the country's worst-hit state, reported 364,965 cases with 29,370 deaths; New Jersey, Massachusetts, Michigan, Pennsylvania and Illinois each reported over 5,000 deaths. 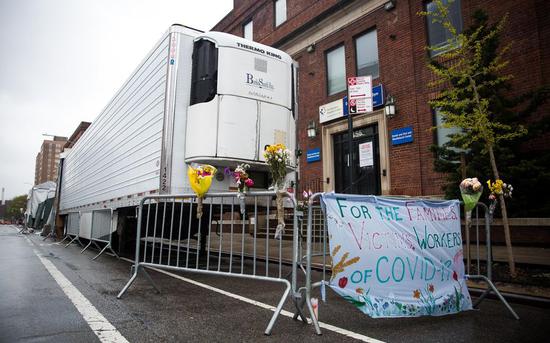 Flowers are placed beside a refrigerated temporary morgue outside Brooklyn Hospital Center in the Brooklyn borough of New York, the United States, on April 24, 2020. (Photo by Michael Nagle/Xinhua)

With all 50 states having partially reopened their economies, a key coronavirus model from the Institute for Health Metrics and Evaluation forecast that more than 140,000 people in the country would die by Aug. 4.

If there is any silver lining for Washington in the midst of the pandemic, it should be coordination and cooperation within the country and beyond, observers say.

"As we battle the coronavirus, American lives depend on a successful government response. But with rare exceptions, House Members' jobs do not," said David Litt, a former speechwriter for then U.S. President Barack Obama, in an article published by TIME magazine.

With 4.25 percent of the world population, the United States has suffered over 28 percent of global pandemic deaths so far. Its death toll is more than double the number of deaths reported in any other nation in the world.

Many U.S. experts believe the tragedy could have been avoided, if timely and coordinated efforts had been taken.

It was not until March 16 that the White House reversed its previously dismissive stance and announced anti-epidemic guidelines, more than two months after Washington received warnings from China and the World Health Organization (WHO).

If the country had begun imposing social-distancing measures one week earlier, about 36,000 lives would have been saved from the pandemic, according to new estimates from Columbia University disease modelers. 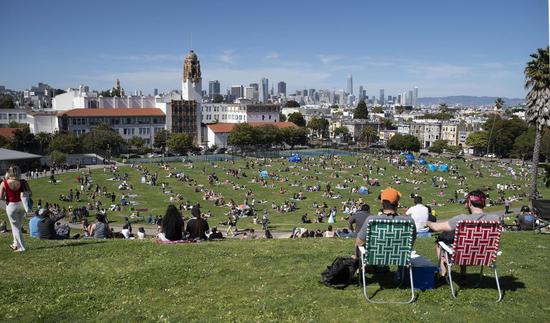 People relax as they sit in circled-off areas to assure social distancing during the COVID-19 pandemic in San Francisco, the United States, May 24, 2020. (Photo by Li Jianguo/Xinhua)

The researchers also estimated that if nationwide lockdowns had begun on March 1, two weeks earlier, about 83 percent of the nation's deaths would have been avoided.

"It's a big, big difference," said Jeffrey Shaman, head of the research team. "That small moment in time, catching it in that growth phase, is incredibly critical in reducing the number of deaths."

Experts also blamed Washington's disregard of early warnings and anemic response for the skyrocketing death toll, saying the U.S. pandemic handling was a work in progress-fragmented, chaotic, decentralized, and plagued by contradictory messaging from political leaders.

"You can't have an effective response to a pandemic if there isn't effective or at least interested leadership at the top," Chris Galdieri, an associate professor at Saint Anselm College, told Xinhua, adding that the White House's disinterest has crippled the U.S. response.

"The U.S. is a very powerful nation, but it has not directed its immense resources into building the kind of public health system that can be resilient in emergencies of this kind," Clay Ramsay, a senior research associate at the Center for International and Security Studies at the University of Maryland, told Xinhua. 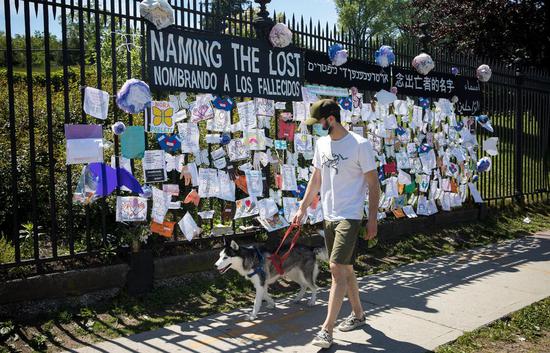 A man wearing a face mask walks by a memorial for COVID-19 victims in front of Green-Wood Cemetery in Brooklyn borough of New York, the United States, May 27, 2020. (Photo by Michael Nagle/Xinhua)
1 2 Next Page