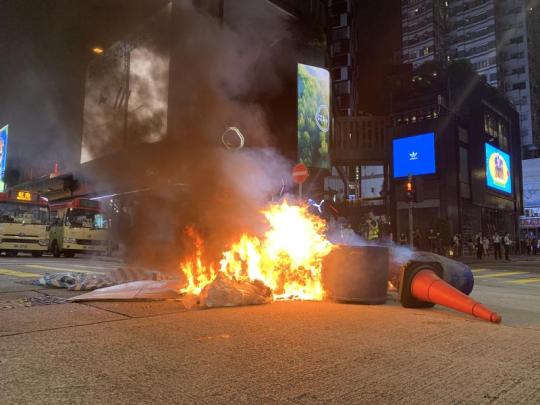 They said "collaboration" by opposition lawmakers in the legislature with the radicals on the streets was "outrageous", "despicable" and "irresponsible".

The bill's second reading on Wednesday was met with filibusters by opposition lawmakers who called several quorum bells and kept making motions to adjourn the debate, citing police arrests during unauthorized assemblies earlier in the day.

Attempts were also made to derail the meeting by requesting debate on a national security law for Hong Kong proposed by the National People's Congress, the country's top legislature.

The National Anthem Bill, which outlaws acts that insult March of the Volunteers, has been delayed for nearly a year, due to filibusters by opposition lawmakers in the LegCo House Committee, which vets bills. The bill was tabled in January last year.

Opposition politicians advocated blocking roads across the city since early morning to prevent legislators arriving at the legislature, according to Legislator and solicitor Holden Chow Ho-ding.

Over 20 pro-establishment lawmakers and President Andrew Leung Kwan-yuen arrived at the LegCo chamber on Tuesday night to pre-empt such attempts.

Chow said the tactics by the opposition and rioters in and outside LegCo was "outrageous" and "irresponsible". These actions — including putting nails on roads — did nothing but harm the city, he said.

LegCo's president had reserved 30 hours on the bill. Chow said voting is expected to begin next week at the earliest.

Lawmaker Wilson Or Chong-shing also denounced the opposition for inciting young people to participate in unlawful protests to achieve their own political agenda.

Legislator and convener of the pro-establishment camp, Martin Liao Cheung-kong, stressed that respecting the national anthem is every citizen's obligation. This should not be distorted to be seen as a form of brainwashing or as infringing people's rights and freedoms, he added.

Talking to reporters in LegCo, Chief Secretary for Administration Matthew Cheung Kin-chung stressed that the national anthem is a symbol of the nation.

The Hong Kong Special Administrative Region, as an integral part of China, has a constitutional duty to legislate on the national anthem, he said.

Noting filibusters to block the bill in 17 House Committe meetings totaling over 50 hours, Cheung said he hopes the legislature will make concrete progress on the bill.

"It's an international practice to observe in solemnity when the national anthem is being played. Why should Hong Kong be an exception?" he said.

Cheung reiterated that the proposed law will not affect freedom or rights enjoyed by Hong Kong residents as long as people don't deliberately and openly insult the national anthem.

The maximum penalty for anyone who insults or undermines the dignity of the national anthem is a fine of HK$50,000 ($6,449) and imprisonment for three years.

Speaking to reporters in LegCo, Secretary for Constitutional and Mainland Affairs Erick Tsang Kwok-wai said the spirit of the bill is to ensure people respect the national anthem.

Tsang said he hopes lawmakers can discuss the bill rationally and pragmatically, and pass it soon to fulfill the SAR's constitutional duty.

On Sept 1, 2017, the NPC Standing Committee passed a National Anthem Law, which came into effect on the mainland on Oct 1, 2017. It adopted a decision to insert the law into Annex III of the SAR's Basic Law, which requires promulgation or local legislation of the law.