Xi extends greetings to young Chinese ahead of Youth Day 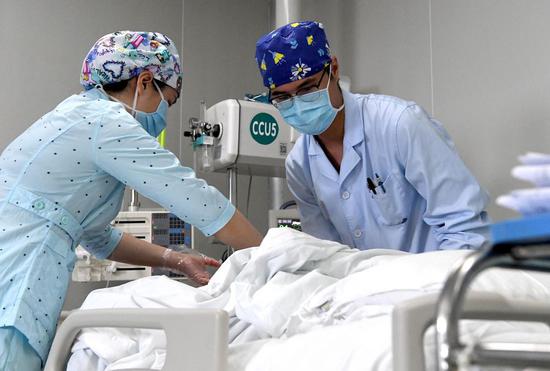 Nurses Liu Guangyao (R) and Qiao Bing take care of a patient at an ICU ward of the Third People's Hospital of Henan in Zhengzhou, central China's Henan Province, April 26, 2020. Liu Guangyao and Qiao Bing are both the hospital's ICU nurses, who are a pair of lovers born in 1990s. (Xinhua/Li An)

Chinese President Xi Jinping has encouraged young Chinese to hold firm convictions, stick to the people's stance and develop genuine skills to devote themselves to the cause of building a great country.

Xi, also general secretary of the Communist Party of China Central Committee and chairman of the Central Military Commission, made the statement on Sunday when sending greetings to young people across the country ahead of China's Youth Day, which falls on May 4.

Facing the sudden outbreak of the novel coronavirus disease, young Chinese of all ethnic groups have actively responded to the Party's call and participated in the all-out people's war against the epidemic, said Xi.

Undaunted by hardships and dangers, they have charged ahead and dedicated themselves to serving the country, showing a high sense of responsibility and winning high praise from the Party and the people, Xi noted.

The year 2020 is the critical year for securing a decisive victory in the fight to eradicate absolute poverty and building a moderately prosperous society in all respects, Xi noted, adding that it also marks the convergence of the timeframes of the two centenary goals.

He called on youngsters to pass on the May Fourth spirit, always work hard and forge ahead with their fellow Chinese along the new long march to realizing the Chinese Dream of national rejuvenation.

Xi urged the Party committees, governments and officials at all levels and the whole society to care for the growth of the nation's youth and support them in pursuing their careers.

Xi also called on the communist youth leagues to shoulder the responsibility to unite and lead the young Chinese in making greater contributions to advancing the Party and country's undertakings in the new era.