COVID-19 can be contained: WHO chief 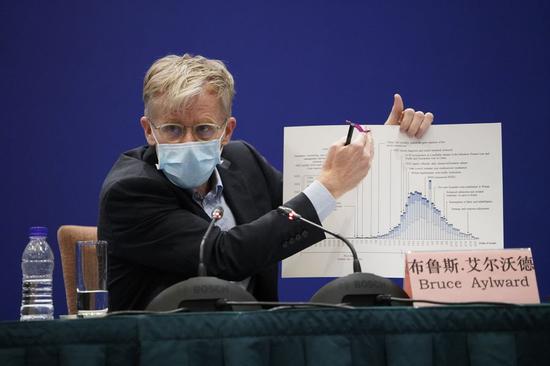 Bruce Aylward, an epidemiologist who led an advance team from the World Health Organization (WHO), speaks during a press conference of the China-WHO joint expert team in Beijing, capital of China, Feb. 24, 2020.(Xinhua/Xing Guangli)

The chief of the World Health Organization (WHO) said Monday that COVID-19 can be contained, which is a clear key message based upon the findings by the WHO-China joint mission in China.

At a daily briefing, WHO Director-General Tedros Adhanom Ghebreyesus said that the WHO-China team had just concluded its mission in China and would detail on their findings on Tuesday.

"But the key message that should give all countries hope, courage and confidence is that this virus can be contained," the WHO chief declared.

He added that the team had traveled to several different provinces, including Wuhan, the epicenter of the outbreak, and had made a range of findings about the transmissibility of the virus, the severity of disease and the impact of the measures taken.

"The epidemic peaked and plateaued between the 23rd of January and the 2nd of February (in China), and has been declining steadily since then," Tedros said, adding that the virus has had no significant change in the DNA.

The fatality rate is between two percent and four percent in Wuhan, and 0.7 percent outside Wuhan, while recovery time for people with mild disease is about two weeks and those with severe or critical disease may need three to six weeks to recover, according to the team.

But the WHO chief still warned about lowering guard against the epidemic.

"This is a time for all countries, communities, families and individuals to focus on preparing," Tedros reiterated. "We must focus on containment, while doing everything we can to prepare for a potential pandemic."