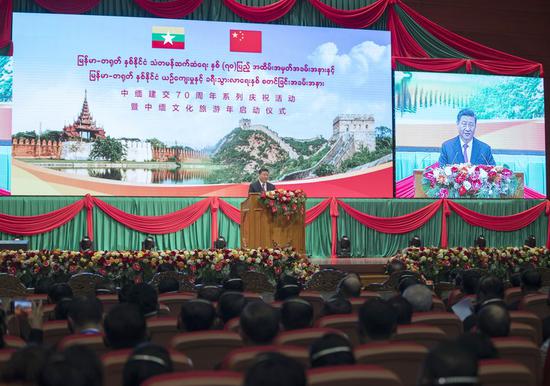 Chinese President Xi Jinping addresses a state event to launch celebrations for the 70th anniversary of China-Myanmar diplomatic ties and for the China-Myanmar Year of Culture and Tourism in Nay Pyi Taw, Myanmar, Jan. 17, 2020. (Xinhua/Fei Maohua)

Chinese President Xi Jinping and Myanmar leaders attended a state event in Nay Pyi Taw on Friday to celebrate the 70th anniversary of bilateral diplomatic ties and the launching ceremony of the China-Myanmar Year of Culture and Tourism.

Myanmar and China share a long history of friendly exchanges, and the two peoples have been bound together like brothers and sisters, U Win Myint said in his address to the guests.

Myanmar and China have witnessed a momentous journey since the two countries established diplomatic relations 70 years ago, he said.

Leaders of the two countries have carried out close friendly exchanges, and the Five Principles of Peaceful Coexistence championed by both countries have become a basic norm in international relations, he said.

The state visit by President Xi on the occasion of the 70th anniversary of bilateral diplomatic ties and his attendance with Myanmar leaders of the ceremony not only demonstrate the profound friendship between the two countries and peoples, but also make this year a new milestone in Myanmar-China relations, U Win Myint said, adding that the Myanmar side will continue to deepen friendly cooperation in various fields with China.

While addressing the guests, Aung San Suu Kyi spoke highly of the attendance of the event by both Myanmar and Chinese leaders.

No matter how Myanmar's domestic situation changes, all its governments attach great importance to developing friendly relations with China, she said.

Aung San Suu Kyi referred to Xi's state visit to Myanmar at the beginning of the year as an important step in the two countries' efforts in building a community with a shared future.

Myanmar actively supports and takes part in the Belt and Road Initiative (BRI) and is looking forward to more fruitful results in building the Myanmar-China Economic Corridor, she said.

Myanmar looks forward to ever more deepening cultural and people-to-people exchanges with China to cement the public support for their friendly ties, she said.

Myanmar firmly believes that under Xi's leadership, China will eventually achieve its two centenary goals and accomplish the great cause of national rejuvenation, and China's development will deliver more opportunities to Myanmar and the world, she said.

Myanmar, she said, stands ready to make joint efforts with China and the rest of the world in building a community with a shared future for mankind and contribute to promoting world peace and development.

Xi arrived in Nay Pyi Taw on Friday for a state visit to Myanmar. It is his first overseas trip this year, and the first visit to the Asian neighbor by a Chinese president after an interval of 19 years.