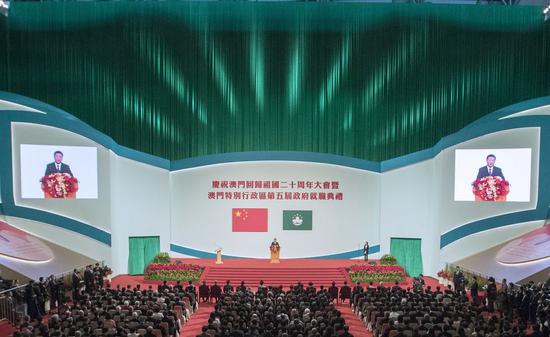 Chinese President Xi Jinping delivers a speech at a gathering in celebration of the 20th anniversary of Macao's return to the motherland in Macao, south China, Dec. 20, 2019. (Xinhua/Huang Jingwen)

Xi made the remarks while addressing a gathering in celebration of the 20th anniversary of Macao's return to the motherland.

Since its return, Macao has made remarkable achievements that awe the world, Xi said.

Macao is small in size but has played unique roles in the "one country, two systems" practice, he added.

The president summed up the following experience:

-- Macao compatriots have firm confidence in "one country, two systems." They have heartfelt support to the principle, and regard it as the best system that ensures Macao's long-term prosperity and stability. Macao is good at grasping the opportunities brought by the country's major development strategies and a series of support policies, so as to realize better development by integrating itself into the country's overall development.

-- Macao compatriots have firmly kept "one country, two systems" in the correct direction. They have a clear understanding that "one country" is the prerequisite and basis of "two systems," unswervingly safeguard the constitutional order as prescribed by the Constitution and the Basic Law, and consciously uphold the authority of the central government and the Basic Law. Executive authorities, the legislature, and the judiciary of the Macao Special Administrative Region persevere in ensuring both the central government's overall jurisdiction over Macao and a high degree of autonomy in the region.

-- Macao compatriots firmly shoulder responsibilities of "one country, two systems." They take the country's overall interests and Macao's fundamental interests into consideration, regard the successful practice of "one country, two systems," "the people of Macao governing Macao" and a high degree of autonomy as common mission, and bind it with the realization of the Chinese dream of national rejuvenation.

-- Macao compatriots firmly consolidate the social and political foundation for "one country, two systems." They have a long tradition of patriotism, as well as a strong sense of identity, belonging and national pride, which is the most important reason for the successful practice of "one country, two systems" in Macao. Patriotic education is well implemented in all kinds of schools, and a sense of national identity and patriotism is deeply rooted in the hearts of Macao's young people.