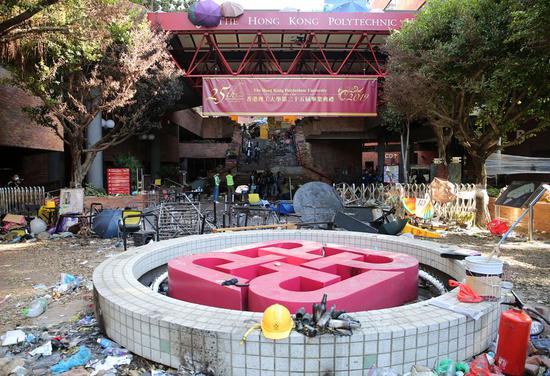 An EDB spokesperson said violations of teacher's code of conduct were found in 30 of 106 cases the EDB has carried out investigations into since June this year.

As important role models for students, teachers' words and deeds must conform to the community's moral and professional expectations, the spokesperson said.

The EDB's move came amid rising concerns about teachers' role in prolonged social unrest and even violent incidents as an increasing number of students were involved in illegal activities in recent months.

About 40 percent of 6,022 people arrested for offenses including unlawful assembly, participation in riot and possession of offensive weapons since June were students, the police have said.

Of the 12 people arrested on Monday morning, six were students and one was a teacher. Police seized flammable liquid and glass bottles that could be used to make petrol bombs, as well as instruments for road blockage, including nails and homemade barricades.

The EDB has asked for the suspension of the teacher arrested on Monday, the spokesperson said.

The spokesperson added the EDB will follow up every case related to teachers, who, if convicted, may face cancellation of their registration.