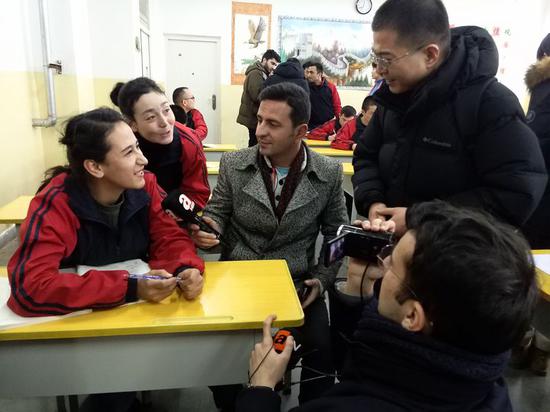 The head of the government of Xinjiang on Monday said the region is determined in counter-terrorism, deradicalization and maintaining development.

"Not any force can stop Xinjiang from moving towards stability, development and prosperity," said Shohrat Zakir, chairman of Xinjiang Uygur Autonomous Region in northwest China. "The unity of all ethnic groups in Xinjiang and their endeavors to strive forward can not be deterred either."

He made the remarks at a press conference in Beijing attended by senior Xinjiang officials.

No terrorist incidents have occurred in Xinjiang in three years, where social public security has improved significantly, Shohrat Zakir said.

He said the counter-terrorism and deradicalization efforts made by the region in recent years have laid a solid foundation for the social stability and enduring peace in Xinjiang.

In 2017, Xinjiang's GDP reached 1 trillion yuan (around 142 billion U.S. dollars) for the first time, while the number in the first three quarters this year rose by 6.1 percent year on year, and the region received over 200 million tourists from January to October, said Erkin Tuniyaz, vice chairman of Xinjiang.

As people of all ethnic groups in Xinjiang have learned that stability is the source of happiness while unrest a source of woes, they will spare no effort in maintaining the sustained stability of the region, Erkin Tuniyaz said.

Not any force from home or abroad will be able to undermine the resolve and determination of people in Xinjiang, he added.

Shohrat Zakir also slammed the passing of the so-called "Uyghur Human Rights Policy Act of 2019" by the U.S. House of Representatives, saying that it seriously violated international law and the basic norms governing international relations and grossly interfered in China's internal affairs.

Certain people in the United States should abandon their political bias and stop playing with double standards in terms of counter-terrorism and deradicalization issues, he said.

The poverty headcount ratio in Xinjiang dropped from 22.84 percent at the beginning of 2014 to 6.51 percent, he said.

The regional government was dedicated to promoting employment, education and medical services to improve people's benefits, with over 70 percent of the general public budget expenditure spent on ensuring and improving people's wellbeing, he said.

The employment services have been boosted for college graduates, urban and rural residents alike, while people are also encouraged to start their own businesses, he added.

On education, the financial subsidies for students from poor families have been increased to ensure their access to the nine-year compulsory education which covers primary school and junior high school. In southern Xinjiang, all the students have access to three-year preschool education all the way to senior high school, the official said.

On housing, subsidized houses were built for 212,700 rural families in this year alone, with renovation started for 154,900 sub-standard urban homes, he added.

"People of all ethnic groups in Xinjiang have truly felt that without the education and training, the current peaceful days would not be possible," Xu said.

Foreign officials, diplomats, journalists and those in the religious circle who have visited the centers also agreed that Xinjiang's counter-terrorism and deradicalization efforts meet the purpose and principles of the United Nations on defeating terrorism and protecting basic human rights and are worth commending and sharing, Xu said.

With the help of the government, they have achieved stable employment, improved their quality of life and been living a happy life, he said.

For the next step, Xinjiang will offer regular and open education and training to village officials, Party members in rural areas, farmers and herdsmen and unemployed middle school graduates who have the willingness and need for such education, he noted.

The education and training will be carried out based on principles under which trainees' wishes and independent choices are respected, he said, adding that attendees are free to join or quit programs at any time. Training programs will be tailored to meet trainees' needs, and the periods of programs will vary based on the courses.