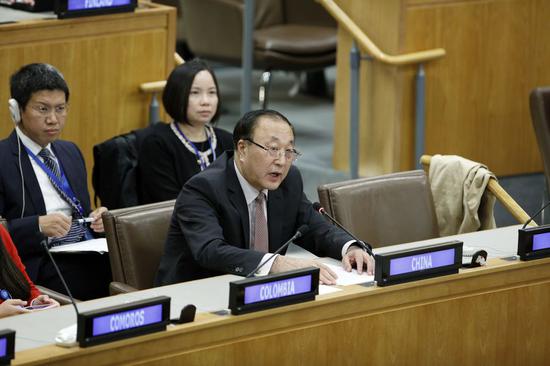 A Chinese envoy on Tuesday refuted the "groundless accusations" on China's human rights by the United States and a few other countries.

"The United States and a few other countries, in their old habits, have made attempt to use human rights to interfere in China's internal affairs, which China totally rejects," Zhang Jun, China's permanent representative to the United Nations, told the UN General Assembly's Third Committee, also known as the Social, Humanitarian, and Cultural Committee.

In response to the accusations against China on issues related to Xinjiang and Hong Kong recently made by the United States and a few other countries, Zhang refuted their statements and "wrongful acts of interfering in China's internal affairs with the excuse of human rights and provoking confrontation at the United Nations."

"It must be pointed out that the trend of the world is unstoppable and the strong bullying the weak receives no support," he said.

"There are someone from some countries who like criticizing developing countries and giving orders on human rights. China urges these countries to abandon hegemonism and power politics, stop all the wrong deeds that go against the trend of history," said the ambassador.

"It must be pointed out that one must examine oneself before critiquing others," Zhang said.

"Some countries create troubles everywhere, plot color revolutions, seriously violate human rights of people of relevant countries, and show no remorse for the terrible human rights record of their own," he said, urging these countries to "do more self-reflection and clean up their own houses, instead of being troublemakers."

"Making human rights accusations against China is barking up the wrong tree," said the envoy.

"China has traveled a journey in several decades which took developed countries several centuries. On a land of 9.6 million square km, there is no fear of war or displacement. Nearly 1.4 billion people are living in peace, freedom and happiness," he said. "This is human rights protection in the best sense and best practice of human rights protection."

"China urges relevant countries to stop the wrong acts of politicization and double standards, stop meddling with China's internal affairs, and come back to the right track of dialogue and cooperation," said the ambassador.