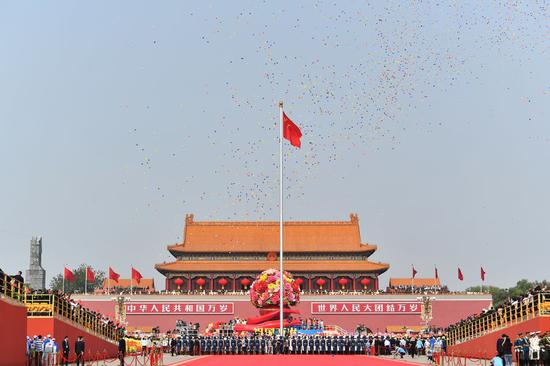 A formation paying tribute to the motherland takes part in a mass pageantry celebrating the 70th founding anniversary of the People's Republic of China (PRC) in Beijing, capital of China, Oct. 1, 2019. (Xinhua/Zhao Ge)

Around the time the People's Republic of China (PRC) celebrated the 70th anniversary of its founding, congratulatory messages poured in from leaders of foreign countries and international organizations in a show of the world's best wishes.

Those messages, and particularly the changes in the amount and content of such messages over the past seven decades, provide a telling glimpse of the remarkable achievements China has accomplished in both national development and international diplomacy, and the great contributions it has made to world peace and prosperity.

On Sept. 30, 1950, Soviet leader Joseph Stalin, whose country was the first to establish diplomatic relations with the PRC a year earlier, sent a congratulatory message to Chairman Mao Zedong on New China's first anniversary, wishing the Chinese people a greater victory in their fight for independence and national construction.

That telegraph, now treasured in China's Ministry of Foreign Affairs, was one of the messages Beijing received that year from leaders, governments and parties in nearly 20 countries, including Albania, Bulgaria, Hungary, the German Democratic Republic, Vietnam, the Democratic People's Republic of Korea (DPRK) and Cuba.

Upon the founding of the PRC, the Communist Party of China (CPC) decided to make a fresh start and lean to socialist countries in building ties with the outside world.

In the 1950s, China, India and Myanmar jointly proposed the Five Principles of Peaceful Coexistence, which helped open a new chapter of China's diplomacy with countries outside the socialist world, especially the developing countries in Asia, Africa and Latin America.

On the 10th anniversary of the PRC's founding in 1959, China received 171 congratulatory messages from 44 countries, including Hungary, Poland, Mongolia, Sweden, Denmark, Finland, Switzerland and Norway.

In his message, Vietnamese leader Ho Chi Minh said the victory of the Chinese revolution and the founding of the PRC were the most important international events after the October Revolution in Russia.

It had a particularly profound and extensive influence on the national liberation movements in Asia, Africa and Latin America, he said, adding that it also helped make the peaceful force in the world stronger than ever before.

The 1970s marked a special period with great significance in China's diplomacy.

In the early 1970s, China established diplomatic relations with some major Western countries such as Canada, Italy, Britain and the Federal Republic of Germany.

In 1971, at the 26th UN General Assembly, all the rights of the PRC in the United Nations were restored with the help of developing countries in Asia, Africa and Latin America. In February 1972, Richard Nixon became the first U.S. president to visit the PRC.

Seven years later, in a message congratulating China on its 30th founding anniversary, also the first after the establishment of China-U.S. diplomatic relations, U.S. President Jimmy Carter said that a strong and secure China was welcome to actively participate in world affairs.

He expressed his belief that an increasingly constructive and cooperative relationship between China and the United States would increase the prospects for peace and stability in Asia and the world.

With the launch of reform and opening up in 1978, China embarked on a path of leapfrogging development, making increasing contributions to global growth despite global political and economic turbulences.

In 1997, on the 48th anniversary of the founding of the PRC, Cambodian King Norodom Sihanouk said in his congratulatory message that China's miraculous overall development and its outstanding role in the international community had won respect and appreciation around the world.

As a stabilizer and driver of the world economy in both the 1997 Asian financial crisis and the 2008 global financial crisis, China became the second-largest economy in 2010. Over the years, China contributes nearly 30 percent of annual global growth.

Now China has established official diplomatic ties with 180 countries, and become one of the most valued partners for countries across the world. From the Belt and Road Initiative to the vision of a community with a shared future for humanity, China has been contributing its wisdom and solutions to promoting world peace and common development.

UN Secretary-General Antonio Guterres, in his congratulatory message this year, described China as a major participant in the work of the United Nations and a main pillar for international cooperation and multilateralism.

While speaking highly of China's splendid achievements over the past 70 years, foreign leaders also expressed their confidence in China's future, and their expectations for more contributions by China to the global good.

Russian President Vladimir Putin said that over the past 70 years, China has made remarkable achievements in such fields as economy, society as well as science and technology.

Noting that China has become the most prestigious and influential country in the world in just 70 years, Kazakh President Kassym-Jomart Tokayev said the Chinese people will certainly achieve the two centenary goals and realize the Chinese Dream of national rejuvenation.

Singaporean President Halimah Yacob, while applauding China's phenomenal transformation over the last 70 years, noted that China's growth and development will benefit not only the people of China but also the region and the world.

"China will stay on the path of peaceful development," Chinese President Xi Jinping said in his National Day speech. "We will continue to work with people from all countries to push for jointly building a community with a shared future for humanity."