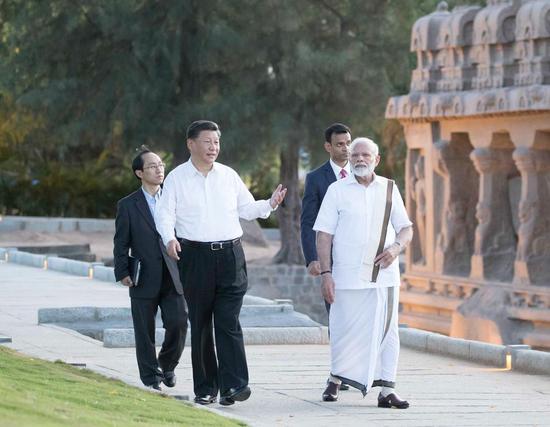 Xi returned to Beijing on Sunday evening after his second informal meeting with Indian Prime Minister Narendra Modi in the southern Indian city of Chennai and a state visit to Nepal.

During Xi's stay in India, the Chinese president had a long and in-depth exchange of views with Modi, Wang said, adding that the two leaders recollected the history of China and India fighting side by side for national independence and liberation, and pioneering the Five Principles of Peaceful Coexistence, and envisioned the future of the two countries jointly realizing their respective national dreams.

Xi said both China and India, as two populous countries, the two largest developing countries and important representatives of emerging economies, are at a critical stage of national development and national rejuvenation, with huge potential and broad space for cooperation, according to Wang.

China and India should be good neighbors who live in harmony and work together as good partners, Xi said, noting that realizing a scenario where the dragon and the elephant dance together is the only correct choice for the two countries, which serves the fundamental interests of both countries and peoples, and works for world peace and prosperity.

Wang said the two leaders have charted out targets and directions for strengthening practical cooperation between China and India.

They have agreed to establish a high-level economic and trade dialogue mechanism, enhance alignment of the two countries' economic development strategies, seek to build a partnership in manufacturing industry, and promote balanced and sustainable growth of bilateral trade.

Xi also called on the two countries to conduct broader and deeper cultural and people-to-people exchanges, and jointly advocate and push forward dialogue and exchanges among different civilizations, so as to continue to create new glory for Asian civilizations, Wang said.

The two countries have agreed to designate 2020 as the China-India year of cultural and people-to-people exchanges, and hold 70 events next year to mark the 70th anniversary of the China-India diplomatic relations.