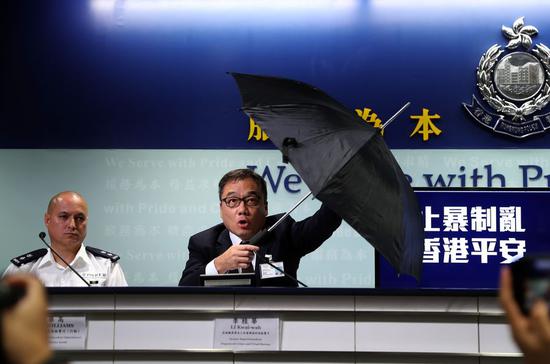 A police spokesman shows one of the weaponized umbrellas rioters used to attack officers, during a police press conference in Hong Kong, south China, Sept. 23, 2019. (Xinhua)

The police arrested 80 people over the weekend's violence, bringing the total number of arrests to 1,556 since protests broke out in June, said Kong Wing-cheung, senior superintendent of the Police Public Relations Branch (PPRB) at Monday's press conference.

A police officer who fell on the ground was beaten by a mob of rioters on Saturday; a rioter took his baton, and another attempted to take his gun, Superintendent Fang Chi-kin said.

Rioters also threw petrol bombs at police vehicles, threatening the lives of officers on board.

Four officers were injured during dispersal operations this weekend. They were either beaten by mobs or hit by bricks that rioters hurled.

Violence against common citizens is also on the rise. More and more citizens were beaten by rioters as violence spread to different parts of Hong Kong, Chief Superintendent Tse Chun-chung said.

Four cases of rioters beating citizens occurred within one hour Saturday night in Yuen Long. In one incident, fists and kicks rained down upon a man, who was surrounded by rioters for tearing down their slogan posters, Tse said.

The man managed to get into a taxi but was dragged out of the car and pushed to a corner where rioters beat him again. Some rioters on the outside held umbrellas to hide the faces of the thugs.

Almost at the same time, a large crowd of rioters chased and beat two other men, who had an argument with some protesters, with iron bars, dust bins and chairs.

Petrol bombs used by the rioters contain accelerants for greater damage. People caught with these petrol bombs will be charged for possessing offensive weapons, Li said.

People who set fires with petrol bombs are committing arson and can be subject to sentences up to life in prison, Li added.

The police also pledged to seriously deal with the desecration of the national flag, the latest of which occurred at a protester-packed mall on Sunday. To date, five people have been arrested in nine related cases since June 9, according to them.

In an appeal for the public to cut ties with violence, Tse said no excuse or propaganda from the rioters could justify or glorify their violent acts.