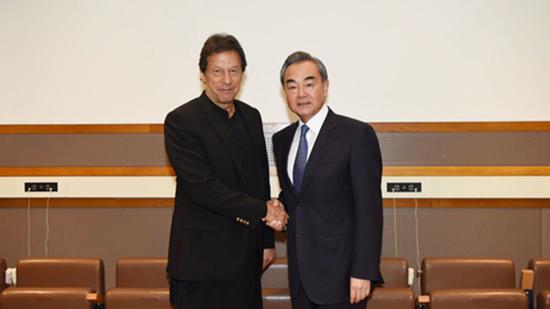 The two leaders met on the sidelines of the annual UN General Assembly in New York on Monday.

2020 marks the 75th anniversary of the founding of the UN, and Wang said China supports the 2030 Agenda for Sustainable Development, especially in addressing poverty reduction, education and climate change.

Benda, meanwhile, congratulated Wang on the 70th anniversary of the founding of the People's Republic of China and lauded the country's remarkable achievements over seven decades.

He also expressed appreciation to China's role in promoting world peace and development.

Wang said the two countries are strategic cooperative partners, and China will continue to support the Pakistani government to defend its territory and sovereignty.

The two sides should work together to build the China-Pakistan Economic Corridor (CPEC) into a model for high-quality development projects under the Belt and Road Initiative (BRI), he added.

Khan echoed Wang, saying Pakistan will push forward the transformation and upgrading of the CPEC and continue to make every effort to ensure safety of Chinese projects, enterprises and personnel in Pakistan.

He said that Pakistan and China are close friends, and his government will spare no efforts in maintaining this friendship.

When he was meeting his Hungarian counterpart Peter Szijjarto, Wang said China wants to deepen political trust and strengthen cooperation with Hungary under the BRI.

Hungary has been a front-runner in the BRI, with remarkable progress made in the Hungary-Serbia railway project, he said.

Szijjarto said Hungary is willing to further expand cooperation with China in various fields and play a positive role in China-EU relationship.