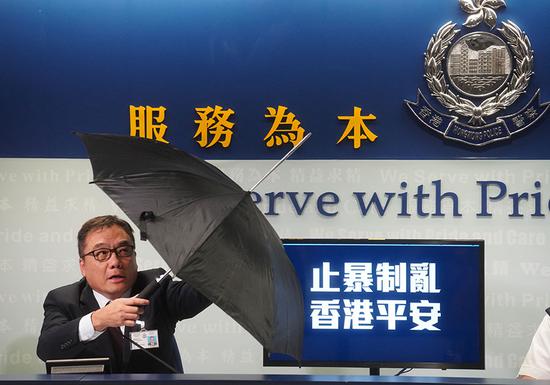 During a news conference held by police in Hong Kong on Monday, Li Kwai-wah, senior superintendent of the Organized Crime and Triad Bureau, displays a special umbrella that had been used by radical protesters. (Photo/China Daily)

A fresh round of violence and vandalism targeting Hong Kong's MTR stations and shopping malls over the weekend sparked wide condemnation as Hong Kong was roiled by anti-government protests for the 16th week.

Over the past weekend, radicals once again hurled bricks and gasoline bombs at police officers and police vehicles and set fire to barricades. Some radicals even attempted to snatch a police officer's revolver.

Some protesters also desecrated a Chinese national flag near a shopping mall in Sha Tin, the New Territories. They stamped on the flag, smeared it and dumped it into a trash can before throwing it into a river. This was another case in which the national flag was stained, burned and trod on in a public place in Hong Kong.

Tung Chee-hwa, vice-chairman of the National Committee of the Chinese People's Political Consultative Conference and the city's former chief executive, stressed that radical extremists' open desecration of national flags has seriously hurt the feelings of the nation's 1.4 billion people.

In a 618-word open letter in Chinese, the former chief executive said he felt "extremely angry, sad, and exceedingly worried" to see Hong Kong on the edge of danger after nearly four months of political unrest.

A small group of "radical rioters" abused the special administrative region's tolerance by attempting to challenge the rule of law and paralyze the SAR government through illegal acts including blocking roads, arson and attacking people, he said.

Amid protests last weekend, a 13-year-old girl was arrested on suspicion of burning a national flag in Tuen Mun.

"These acts not only violated the National Flag and National Emblem Ordinance, but were also open provocation on national dignity, and a reckless challenge to the bottom line of the 'one country, two systems' principle," Tung remarked.

In response to the attempted revolver snatching, Lam Chi-wai, president of the Junior Police Officers' Association of the Hong Kong Police Force, strongly condemned such acts that posed a grave threat to the lives of officers and other people present nearby.

"Firearms are the second life of police officers … all police officers were told on the first day of starting service that they should try every means to protect firearms from being snatched," Lam said. "Otherwise they'll be in danger."

The officers would have to make the "only" and "necessary" choice if their firearms are taken, Lam warned.

The mayhem over the weekend also drew criticism from political heavyweights. Lau Yu-leung, a Hong Kong member of the National Committee of the Chinese People's Political Consultative Conference, said he was saddened by the outrageous acts of violence perpetrated in total disregard of the law.

He urged protesters, the majority of them young people, to immediately stop the violence.

"Hong Kong is our home. Young people are bound to suffer the consequences if our home is destroyed," Lau said.

During the weekend's protests, MTR stations once again became a primary target of radicals. At least eight MTR stations across the city were forced to shut down on Sunday after black-clad protesters went on a rampage.

In a statement issued on Sunday night, MTR Corporation Limited, the city's sole railway operator, condemned the latest eruption of violence that severely affected journeys and endangered the safety of passengers and MTR staff.

On Sunday, a group of black-clad and masked protesters also trashed several shopping malls owned by Sun Hung Kai Properties, with New Town Plaza in Sha Tin bearing the brunt of it.

They destroyed facilities and harassed shop employees and customers.