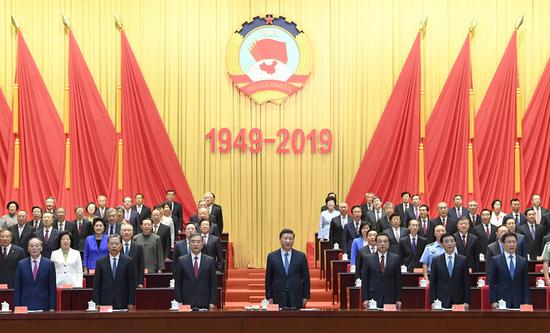 Being open to advice and criticism from the Chinese People's Political Consultative Conference, the top political advisory body, can help the central government make the right decisions and ensure the country's development stays on the right track, experts said on Sunday, following a speech by President Xi Jinping on Friday.

Xi called for giving full play to the system of democratic centralism, promoting expression and exchanges of differing ideas and opinions and improving the mechanism to ensure consultation — both before and during the decision-making process.

Xi, who is also general secretary of the Communist Party of China Central Committee and chairman of the Central Military Commission, made the remark on Friday in Beijing at the Central Conference on CPPCC Work, which marked the 70th anniversary of the consultative body.

Zhu Lijia, a professor of public administration at the National Academy of Governance, said, "China has entered an era in which an increasing number of social problems and conflicts have surfaced because of its fast development. So receiving advice from other political parties, people without party affiliation, people's organizations and all ethnic groups and all walks of life is important. They can use their expertise to see solutions to problems from a different angle, not just the Party's."

Such advice — and even criticism — is crucial in ensuring that China's development stays on the right path, Zhu added.

Xi said at the conference that being open to advice and criticism, as well as making improvements in the work, show confidence and capability. As long as different parties of the CPPCC uphold the fundamental theory, path and strategy of the Party, they should be encouraged to speak their opinions, even harshly and fiercely at times, he said.

The Party should be delighted to hear criticisms and correct mistakes if there are any, as well as to guard against introducing errors, Xi added.

Fan Peng, a researcher at the Chinese Academy of Social Sciences' Institute of Political Sciences, said, "Socialist consultative democracy allows the central government to respect the diversity of Chinese society as it promotes exchanges between different political parties and all walks of life.

"More important, it encourages people to offer their advice on the Party and the country's key tasks, so people with different backgrounds can be on the same page when it comes to China's development path."

Xi said at the conference that the CPPCC needs to guide its members from Hong Kong and Macao to support the law-based administration of the special administrative regions' governments and chief executives.

Zhu, the public administration professor, said such support is important for Hong Kong, even when there is no conflict.

"CPPCC members can do more to unite the Hong Kong people to fully implement the 'one country, two systems' policy," Zhu said.

Samuel Yung Wing-ki, a CPPCC National Committee member from Hong Kong, said on Sunday that it's necessary to strengthen the patriotism that reflects love of both the country and the city. That's the way to maintain the SAR's prosperity and stability in the long run, Yung said.

To achieve that, he encouraged CPPCC members from the region to extensively engage people from various backgrounds, especially young people, and brief them about the nation's latest developments and the opportunities made possible by major national strategies. This will buttress people's national identity, as well as their recognition of the country, he said.

Yung said it is a basic requirement for CPPCC members to support the SAR government.

Lau Siu-kai, vice-president of the Chinese Association of Hong Kong and Macao Studies, a think tank, said that Hong Kong's recent social unrest shows that patriotism needs to be enhanced and expanded in society. Hong Kong members of the CPPCC should play a greater role in the region's political arena and serve as a bridge between the Chinese mainland and the SAR, he said.