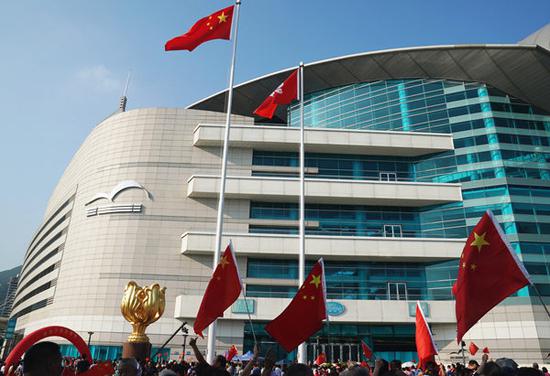 Woman representatives from the Chinese city of Hong Kong said earlier on Tuesday that they will bring the truth about Hong Kong as well as what the average Hong Kong people think about the local situation to the United Nations.

Pansy Ho Chiu-king, chairperson of the Hong Kong Federation of Women (HKFW), and Annie Wu Suk-ching, advisor to the HKFW, made the remarks Tuesday before attending the 42nd session of the UN Human Rights Council.

They are scheduled to brief the session on the situation in the Hong Kong Special Administrative Region (HKSAR) of China, which has seen nearly three months of protests with violence by radical demonstrators and a large number of arrests made by police.

Protests still continue in Hong Kong even after the HKSAR government announced on Sept. 4 that it will formally withdraw the proposed amendments to an extradition law.

Ho said Hong Kong's existing legal framework allows as many as possible peaceful ways for people to voice their sentiments and demands, and the escalated violence in the protests "has almost ruined everything of the established international image of Hong Kong."

Violent acts such as vandalizing facilities to block the subway traffic and paralyze the airport operation have not only tarnished the image of Hong Kong, but also disrupted the economic activities and people's daily life, Wu told reporters.

Ho said it is the average residents and the small businesses who bear the brunt of the chaos and tensions in Hong Kong.

"I want to ask this question: When you use the freedom to express your thoughts, are you aware of the rights for other people to live a tranquil life?" she said.

"After all, Hong Kong's affairs are the internal affairs of our own country, and people from all walks of life should make concerted efforts to find a solution in order that Hong Kong will not be reduced to a political tool," Ho noted.

Ho also praised the maximum restraint exerted by the Hong Kong police in dealing with protestors.

In the past months, Hong Kong police often faced personal assaults while almost working around the clock, Ho said, adding that such a situation, unprecedented in Hong Kong, has made many local inhabitants dare not go out.

On reporting on Hong Kong's situation at the session of the UN Human Rights Council, Ho said that she, herself as a woman leader, businesswoman and public figure, has the responsibility to do her utmost for Hong Kong's future.

"I'm willing to speak for Hong Kong to have a peaceful and tolerant society," said Wu, who is also a well-known businesswoman in Hong Kong.