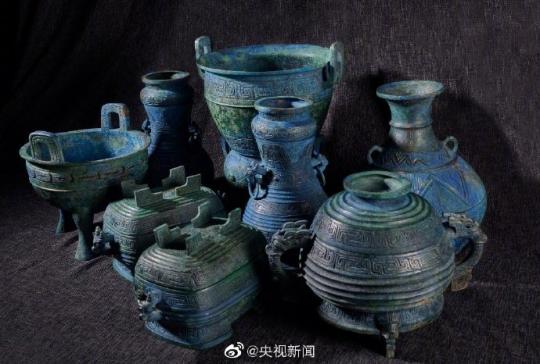 An eight-piece set of bronzeware belonging to Chinese cultural heritage has been brought home from Japan. [Photo/CCTV]

They are among the most-valued relics sets that have been successfully sought and brought back to China in recent years after their illegal trade on the international market was stopped, said Guan Qiang, deputy head of the administration.

The bronzeware were identified by researchers to be stolen items from ancient tombs dating back to the Spring and Autumn Period (770 B.C.-476 B.C.) located in Suizhou, central China's Hubei Province.

According to officials, the bronzeware, along with the 330 Chinese characters engraved onto them, provide researchers with valuable information regarding the ancient state of Zeng, which is mysteriously absent from historical articles.

The bronzeware returned to China on Aug. 23 thanks to joint efforts from China's diplomatic, cultural and public security departments, Guan said.

The bronzeware's retrieval was conducted in accordance with international conventions, primarily the 1970 UNESCO Convention on the Means of Prohibiting and Preventing the Illicit Import, Export and Transfer of Ownership of Cultural Property, and had the cooperation of the Japanese government. It contributed a new practical case to the international recovery and return of lost cultural relics, according to Chinese officials.