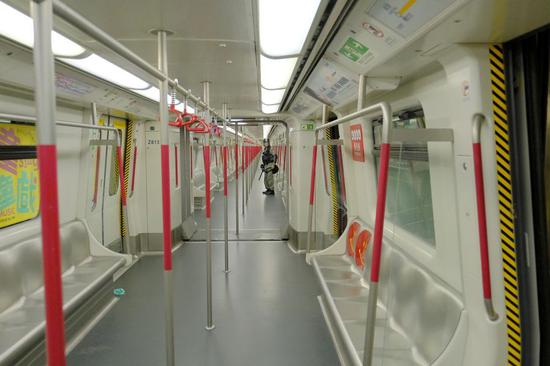 Chief Executive of China's Hong Kong Special Administrative Region (HKSAR) Carrie Lam on Monday expressed thanks to the Hong Kong MTR for resuming normal operations in the early morning to provide in-time services for passengers, after over 10 stations were seriously damaged by rioters Sunday night.

At around 5:00 a.m. Monday morning all stations of the MTR were open to passengers, making all residents ready to go to work or school feel greatly relieved, Lam said in a facebook post.

During Sunday night over 10 stations of the MTR were seriously damaged by rioters, and the sites were too ghastly to look at. The MTR staff worked overnight to resume operations to reduce the impacts to passengers, displaying professionalism and spirit of service, she said.

"I hereby express thanks to all MTR staff," said the chief executive.

Previously, the Hong Kong court issued separate interim injunctions to restrain persons from unlawfully and willfully obstructing or interfering with the proper operation of Hong Kong international airport and railway.

Radical protesters, however, deliberately defied the order and obstructed the operation of the airport, blocked roads and set fires nearby on Sunday, leading to severe traffic congestion at the airport, affecting a large number of passengers and causing damage to Hong Kong's economy.

Some rioters threw iron sticks, bricks and stones into railway tracks, endangering the safety of railway operations. Some also vandalized MTR stations, the Tung Chung station which is close to the airport in particular, and caused severe damage and suspension of services on several MTR lines.