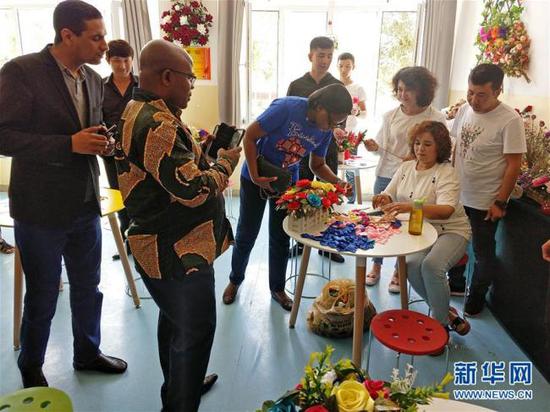 Diplomats and representatives based in Geneva from 14 countries and an organization are visiting Kashi Vocational Education and Training Center, in Kashi, Xinjiang Uygur Autonomous Region, on June 20, 2019. [Photo: Xinhua]

Diplomats and representatives based in Geneva from 14 countries and an organization visited Xinjiang Uygur Autonomous Region from June 18 to 21 at the invitation of the Chinese Foreign Ministry.

During the trip, the diplomats from countries including Algeria, Laos, Nigeria, Somalia and Tajikistan, as well as a representative of the Organization of Islamic Cooperation (OIC), interacted extensively with local residents, farmers, teachers and students in various places across the region.

They said Xinjiang had taken a series of effective measures to promote the local economy and maintain social stability.

Ouedraogo Wendegoudi Jacqueline, a foreign affairs counselor from Burkina Faso, said she was impressed by the happy and rich life of residents in Urumqi, the regional capital, after dancing with them in a lake square after dinner.

Ambassador Zenon Mukongo Ngay from Democratic Republic of the Congo appreciated handmade copperware in a shop at the Grand Bazaar and chatted with the shop owner.

He said Xinjiang has developed commerce and adequate infrastructure, and he would bring his family here for sightseeing and a taste of local culture in the future.

When strolling in the ancient city of Kashgar, now a popular tourist destination in China, Syed Edwan Anwar, Malaysia's deputy permanent representative in Geneva, said he could feel the happiness of ethnic shop owners, and the efforts Chinese government made to improve local residents' livelihood.

Syed Edwan Anwar said Xinjiang had effectively protected the inheritance of local ethnic cultures, which was worthy of praise.

Laotian ambassador Kham-Inh Khitchadeth said he was glad to see ethnic groups in Xinjiang get along with one another and jointly inherit and promote their cultures.

Memet Juma, imam of the Id Kah Mosque in Kashgar, told diplomats that a new library, a bath room and priority seats for the old, weak and disabled had been added to the facility in recent years.

The diplomats also attended a trial in Urumqi. The parties involved were Uygurs, so the whole process was conducted in Uygur language.

After an exhibition on major terrorist attacks in Xinjiang, Algerian ambassador Boudjemaa Delmi said terrorism was the common enemy of the world, and international cooperation should be enhanced to wipe out terrorism and bring peace, security and prosperity to the world.

The ambassador said Xinjiang's countermeasures against terrorism are effective and worth learning from.

At vocational education and training centers in Kashgar and Hotan, diplomats communicated directly with teachers and trainees to know about their courses and teaching methods.

Nigerian ambassador Audu Ayinla Kadiri said what he saw was entirely different from some negative media reports on the vocational education and training centers.

He said such vocational education and training was a new attempt to deal with terrorism, which was very good.

Ambassador Dejan Zlatanovic from Serbia said it was a wise and reasonable measure to establish vocational education and training centers, which help the people who have been influenced by extremist thoughts to return to society with professional skills.