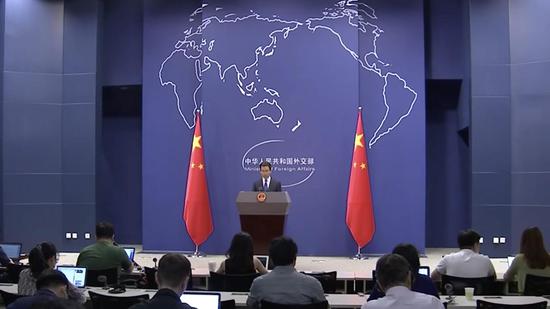 The Chinese central government has reiterated its support for the authorities of Hong Kong Special Administrative Region (HKSAR) over the new extradition bill, which would allow the transfer of suspects wanted in the Chinese mainland, Taiwan and Macao.

A spokesperson for the Chinese Foreign Ministry made the remarks at a daily news press conference on Wednesday, referring to the efforts Hong Kong is making in regards with the Fugitive Offenders Ordinance and Mutual Legal Assistance in Criminal Matters Ordinance.

"Since the return of Hong Kong, the policy of 'one country, two systems' and Hong Kong people administrating Hong Kong have been effectively implemented, and the rights and freedoms of Hong Kong residents have been guaranteed," Geng Shuang said.

On Wednesday, scuffles erupted between protesters and police in Hong Kong outside the Legislative Council.

Police condemned the violence as irresponsible behavior, calling on protesters who threw plastic bottles to voice their views in a peaceful way. Discussions on the amendments had been scheduled during the day, but were suspended after protesters blocked traffic.

"We have no choice, we have to use force to stop the riots from challenging us," Commissioner Stephen Lo Wai-chung said, speaking about the use of rubber bullets and tear gas. "I condemn the rioters' irresponsible behavior. They can express their views, but they should not hurt others, such as my colleagues and other innocent people."