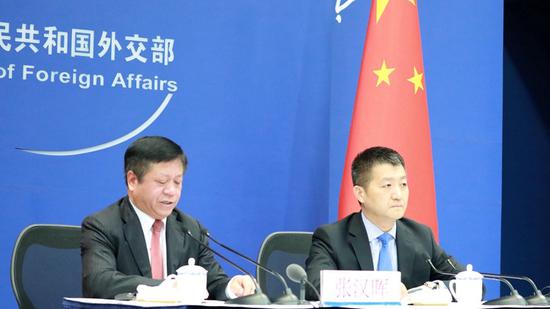 According to the ministry, President Xi will visit Russia from June 5-7 and attend the forum at the invitation of Russian President Vladimir Putin.

The international landscape is now facing changes unseen in the past centuries, which is posing a severe challenge to the basic norms governing international relations, hotspot issues flare up in different parts of the world, the human society is facing increasing challenges and threats, against this backdrop, China-Russia relationship has enjoyed a sound momentum, Zhang noted.

"The two sides enjoy ever more solid mutual trust and give each other strong support on issues concerning respect co-interests and major concern."

Hailed the cooperation between the two sides, Zhang briefed that China-Russia two-way trade has surpassed 100 billion U.S. dollars, heating up a record high.

The two sides are making solid progress in cooperation on such strategic projects as energy, aerospace, aviation and connectivity, and cooperation in agriculture, finance, science and technology, and many other emerging areas is also booming, Zhang told reporters.

"Cooperation has shown strong internal growth and is heading to a promising future."

During the visit, President Xi and President Putin will attend state events together, such as assembly celebrating the 70th anniversary of China-Russia relations and a number of people-to-people and cultural activities, Zhang said.

"They will sign two important political documents and witness the signing of multiple cooperation documents," add the vice-minister.