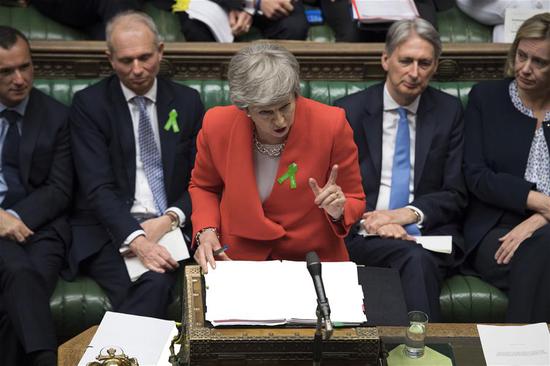 British Prime Minister Theresa May (Front) attends the Prime Minister's Questions at the House of Commons in London, Britain, on May 15, 2019. (Xinhua/UK Parliament/Jessica Taylor)

British Prime Minister Theresa May confirmed Wednesday she still wants Britain to leave the European Union (EU), but she rejected a second referendum or remaining in the EU's customs union.

May outlined her hopes during Prime Minister's Questions in the House of Commons, just a week before her Conservative Party is preparing for dismal results in European Parliament elections.

Widespread media reports in London Wednesday said May is to put her Brexit proposals to MPs in early June for what will be the fourth time.

The Daily Telegraph said May was trying to buy herself time with the new vote in Parliament, but it already looked set for another defeat.

May met main opposition leader Jeremy Corbyn for cross-party talks Tuesday night during the latest round of bi-lateral talks between Labour and her Conservative party.

The talks, aimed at finding a consensus that would lead to parliament agreeing a withdrawal deal, have so far failed to make a breakthrough.

During the talks May told Corbyn she would table a vote on a Brexit Bill early next month with or without a deal with Labour.

May has also told her most senior ministers it was imperative the Brexit legislation is passed before the British Parliament breaks for its long summer recess.

Downing Street said the government plans to publish the Withdrawal Agreement Bill in the week beginning June 3 to force MPs into a choice between the deal on the table or the possibility of Brexit being cancelled.

The Democratic Unionist Party that gives May her slender majority in the House of Commons is reported to have made clear they do not plan to back the bill.