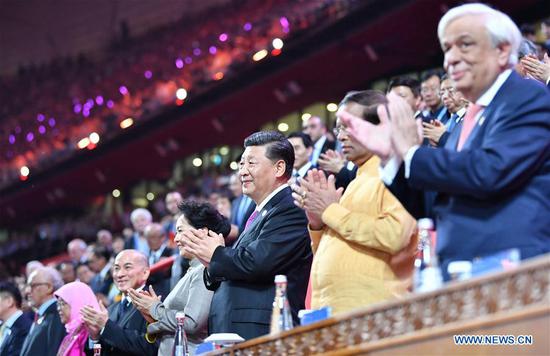 Chinese President Xi Jinping and his wife Peng Liyuan attend the Asian culture carnival, a major event of the ongoing Conference on Dialogue of Asian Civilizations, together with foreign guests at the National Stadium in Beijing, capital of China, on May 15, 2019. (Xinhua/Yin Bogu)

Dazzling dance steps and music from different corners of Asia livened up the National Stadium in Beijing Wednesday evening as a grand carnival was held to celebrate the diversity of Asian civilizations.

Chinese President Xi Jinping and his wife Peng Liyuan attended the carnival, a major event of the ongoing Conference on Dialogue of Asian Civilizations, together with foreign guests.

In a speech to declare the beginning of the carnival, Xi said Asian cultures demonstrate great richness and vitality thanks to the diversity of Asian civilizations.

"Tonight, the colorful flowers of Asian cultures will blossom in full," he said. "Arts will transcend the boundaries of nations, touch people right in the heart and connect their minds, showing to the world a radiant, dynamic, peaceful and progressive Asia."

Chinese people sincerely hope that Asian countries will help each other and work closely together to advance with the rest of the world, he said.

The same stadium, also known as the Bird's Nest, was the stage of the opening ceremony of the Beijing Olympics Games in 2008.

Around 30,000 audience from home and abroad watched artists from across Asia perform folk dances, play traditional musical instruments or sing popular songs from their homeland.

Upasana Madan, an Indian dancer, said she felt thrilled to be back on a Chinese stage 18 years after a three-week performing tour in China.

"Everyone is coming and sharing their cultures. We see artists from other countries and understand their cultures through their dance and music," she said. "It is beautiful how this program is bringing all these countries together."

Apanaeva Gyuzel, who led a team of Russian artists to attend the carnival, told Xinhua that she and her fellow artists were honored to present Russian culture at the event and carefully chose a dance that could best showcase the characteristics of Russian people.

"The stage, equipped with the latest visual technologies, is very impressive, and the show is so spectacular. We learned a lot and made many friends," she said. "It is indeed a great journey."

The audience was fascinated by the performances and visual effects of the stage, as many stood up, applauded, and waved glow sticks in their hands, singing and swaying with the music.

"This show brings back memories of the opening ceremony of the Beijing Olympics. I was overwhelmed tonight," said Tang Yuting, a student from a Beijing college. "The conference is a very good opportunity to promote our own culture and to better understand the outside world."