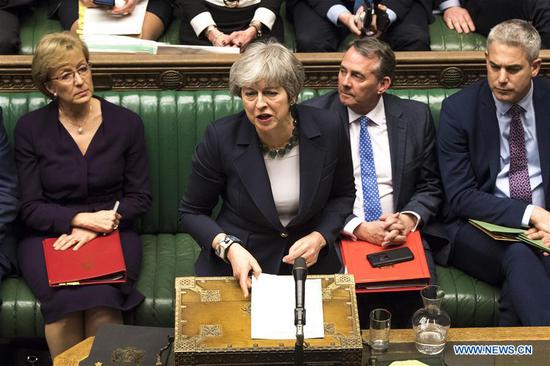 British Prime Minister Theresa May (Front) speaks during the no-deal Brexit vote in the House of Commons in London, Britain, on March 13, 2019. British MPs on Wednesday voted to reject no-deal Brexit at any time in the wake of Tuesday night's shattering defeat of the Brexit deal of British Prime Minister Theresa May. (Xinhua/UK Parliament/Mark Duffy) HOC MANDATORY CREDIT: UK Parliament/Mark Duffy

British Prime Minister Theresa May will have one last shot of winning support for her Brexit deal after MPs voted Wednesday to stop Britain quitting the European Union (EU) without a deal.

A vote to prevent a no-deal Brexit in any circumstance was won by 321 votes to 278 in the House of Commons.

Work and Pensions Minister Sarah Newton became the 15th government minister to resign over Brexit. She quit tonight after she voted against the government.

It means MPs will return to the historic chamber at Westminster Thursday to debate asking for Britain's delay from the EU to be delayed.

A government proposal for debate Thursday would see MPs having until next Wednesday to see if they could finally agree a deal.

If they agree a Brexit deal, the government would ask for a short extension of EU membership to June 30, to enable legislation to be rushed through the House of Commons.

But if there was no deal, Britain would seek to stay in the EU for longer and would have to take part in European Parliament elections in May.

MP Steve Baker from the influential pro-Brexit group of Conservative MPs, the European Research Group, said in the House of Commons that if May presented the deal already rejected twice by MPs, members of ERG would vote against it a third time.

May, her voice still hoarse, took part in a debate Wednesday to enable MPs to decide if they wanted to rule out Britain leaving the EU with no deal.

May announced her support for the main motion to rule out a no-deal Brexit unless a deal had been agreed, but it kept alive the possibility of Britain leaving the EU if there wasn't a deal. Conservative MPs were told they could have a free vote on that motion.

An amendment was put forward to rule out Britain leaving under any circumstance without a deal.

To the shock of Conservative Party managers that amendment won by 312 votes to 308, a narrow four vote margin.

It meant the main motion of the evening was now amended to incorporate the successful amendment. Conservative managers changed their minds and withdrew the free-vote offer, meaning party MPs were required to vote against it.

However, it won by 321 votes to 278, representing another crushing blow for the already embattled May.

There is still great unease in the House of Commons over May's unpopular Brexit deal with its risk of measures to prevent a hard border on the island of Ireland. Many MPs opposed to May's deal fear Britain would be locked into EU rules for years, or even indefinitely, with no means of escape. They wanted legal guarantees to make sure this could not happen.

Across the House of Commons, a number of MPs have been demanding a block on a no-deal exit, fearing that May was running down the clock towards March 29 with the prospect of Britain ending its EU membership with no deal by default.

The sum total of MPs voting against May for different reasons all added up to inflict yet another defeat.

MPs will gather at Westminster Thursday, with just 16 days to go before the scheduled March 29 departure date. They are set to debate on whether they want Britain to seek an extension to Article 50. That is the EU's trigger mechanism that sets a two-year countdown to departure day. It runs out on March 29, having been trigger in March 2017.

Even if British MPs vote for a delay, the final decision is in the hands of the leaders of the 27 EU member states. They will want to know why Britain wants to delay its departure, and all have to agree.

After losing the vote in the Commons on Wednesday, a day after her Brexit deal had been overwhelmingly defeated again, May addressed MPs.

She told them the options before the House of Commons are the same as they always have been.

She said: "The House has today provided a clear majority against leaving without a deal, however I will repeat what I said before. These are about the choices this House faces. The legal default in EU and UK law is that the UK will leave without a deal unless something else is agreed. The onus is now on every one of us in this House to find out what that is."