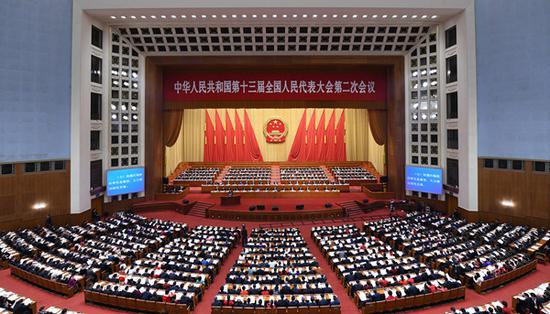 The second session of the 13th National People's Congress opens at the Great Hall of the People in Beijing, capital of China, March 5, 2019. (Xinhua/Zhang Ling)

China unveiled Tuesday its growth and reform targets for 2019, the 70th anniversary of the founding of the People's Republic of China, and a "crucial year" in the country's endeavor to build a moderately prosperous society in all respects by 2020.

The world's largest developing economy set its new year GDP target at 6-6.5 percent, according to a government work report delivered at the opening of the second session of the 13th National People's Congress (NPC), the national legislature.

Xi Jinping and other Chinese leaders attended the opening meeting with nearly 3,000 NPC deputies gathering at the Great Hall of the People in Beijing.

The range target came after the Chinese economy outperformed the 2018 official projection of "around 6.5 percent" to expand 6.6 percent. China watchers observed that the new target is still within reasonable range and should be perceived in the right context.

"A full analysis of developments in and outside China shows that in pursuing development this year, we will face a graver and more complicated environment as well as risks and challenges, foreseeable and otherwise, that are greater in number and size," Premier Li Keqiang said while delivering the report.

The International Monetary Fund lowered its global economic growth projections for 2019 and 2020 in January, while maintaining China GDP growth forecast at 6.2 percent for the two years.

China set its 2019 consumer inflation target at around 3 percent, the surveyed urban unemployment rate at around 5 percent, and the registered urban jobless rate within 4.5 percent.

Li called the projected targets "ambitious but realistic," as they "represent the country's aim of promoting high-quality development, are in keeping with the current realities of China's development, and are aligned with the goal of completing the building of a moderately prosperous society in all respects."

China aims to double its 2010 GDP by 2020, and an average growth rate of about 6.2 percent in 2019 and 2020 is enough to achieve this end, according to Liu Shijin, vice chairman of the China Development Research Foundation.

In addition, the fixation on headline GDP overlooks deeper issues shaping the China growth debate, because the Chinese economy is in the midst of an extraordinary structural transformation -- with a manufacturing-led producer model giving way to an increasingly powerful services-led consumer model, noted Stephen Roach, senior fellow at Yale University's Jackson Institute for Global Affairs.

The expected GDP growth and other goals are widely considered attainable thanks to the economy's proven resilience and government's powerful policy toolkit.

Li reiterated that China is still in an important period of strategic opportunity for development and has ample resilience, enormous potential, and great creativity to unleash. "The longing of our people for a better life is strong," he said.

China will maintain a proactive fiscal policy stance this year, with a higher deficit-to-GDP ratio to leave policy space to address potential risks.

A prudent monetary policy will be eased or tightened to the "right degree" with focus on feeding the real economy.

The government will boost consumption via means such as steeper tax and fee cuts, and expand effective investment with increased spending on infrastructure.

"The Internet will be fully integrated with and transform industrial value chains, boosting resource allocation efficiency and serving the high-quality development of the real economy," said Pony Ma, Tencent CEO and a national lawmaker.

Latest indicators such as growing credit demand and improving business confidence show that economic recovery is gathering momentum thanks to a raft of supportive policies.

China will also step up reform and opening-up to improve market mechanisms and foster new strengths in international economic cooperation and competition, the report shows.

For example, network ownership and operation in natural monopoly industries will be separated to make the competitive aspects of their operations fully market based.

A new survey released last Month by the American Chamber of Commerce in China (AmCham China) said that China remains a high priority market for the majority of companies, despite challenges.

"China's investment environment is all set to get better and better, which means more and more business opportunities for foreign companies in China are a sure thing," Li said.