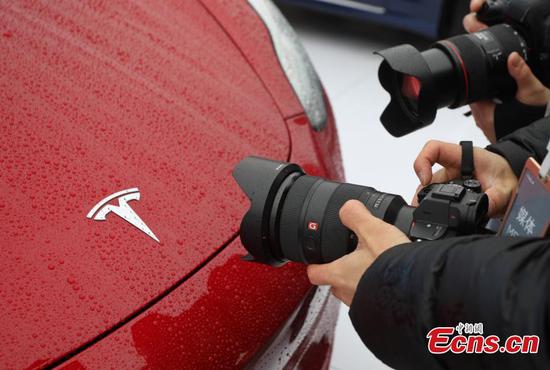 A big batch of Tesla's long-range Model 3 sedans have arrived at north China's Tianjin Port after 84 such cars were imported via the port in February.

A total of 1,171 Model 3 sedans, in addition to 44 models of Tesla's other lineups and 590 cars of other brands, were imported via the same freighter, according to freight authorities at the port.

According to the China Association of Automobile Manufacturers (CAAM), in 2018, 1.27 million new energy vehicles (NEV) were produced in China, while about 1.26 million were sold, up 59.9 percent and 61.7 percent year on year, respectively.

The booming NEV market in China has drawn the attention of foreign car-makers including Tesla.

Compared with other Tesla models, the Model 3 offers a more compact and low-priced option, with a starting price of 433,000 yuan (about 64,300 U.S. dollars). Earlier this month, prices of several other Tesla models were further reduced to attract more customers.

At present, Tesla has established its charging network covering more than 170 cities in the country and has built more than 1,300 fast-charging supercharging stations in total.

The Tesla Shanghai Gigafactory, the largest foreign-invested manufacturing project in Shanghai's history, broke ground in January. The factory is designed with an annual production capacity of 250,000 electric cars including the Model 3 in the first stage.