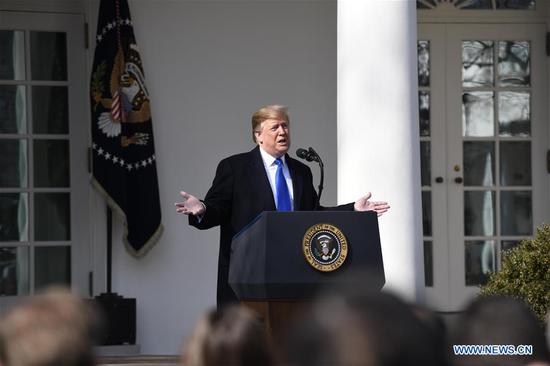 U.S. President Donald Trump speaks at the Rose Garden in the White House in Washington D.C., the United States, on Feb. 15, 2019. Trump announced Friday he will sign a national emergency to expand the U.S.-Mexico border wall and push for his signature campaign promise. (Xinhua/Hu Yousong)

U.S. President Donald Trump signed on Friday a national emergency to expand the U.S.-Mexico border wall and push for his signature campaign promise.

The move gave the president power to bypass Congress to get access to money, but it sparked a new round of legal and partisan battles almost immediately.

"I'm going to be signing a national emergency," Trump said at the Rose Garden in White House on Friday morning. "It's a great thing to do because we have an invasion of drugs, invasion of gangs, invasion of people."

"We will have a national emergency, and we will then be sued," the president predicted an upcoming legal fight in federal court. "Then we'll end up in the Supreme Court."

Together with 1.375 billion dollars for physical border barriers included in the spending bill approved by Congress on Thursday, the total fund for Trump's border wall amounts to roughly 8 billion dollars. Trump had previously demanded 5.7 billion dollars.

Officials said the goal is to ultimately build roughly 234 miles of barriers along the U.S.-Mexico border, including bollard-style wall.

"This is plainly a power grab by a disappointed President, who has gone outside the bounds of the law to try to get what he failed to achieve in the constitutional legislative process," they said in a joint statement.

"This issue transcends partisan politics," they said. "The President's emergency declaration, if unchecked, would fundamentally alter the balance of powers, inconsistent with our Founders' vision."

"The President's unlawful declaration over a crisis that does not exist does great violence to our Constitution," the top two congressional Democrats said, vowing to use "every remedy available" against it and calling for Republican lawmakers to join their efforts.

Several Republican lawmakers have also expressed their concern over the expanding of presidential powers, warning future Democratic presidents may follow the suit.

But Senate Majority Leader Mitch McConnell on Thursday voiced his support for Trump's declaration, calling it "the predictable and understandable consequence of Democrats' decision to put partisan obstruction ahead of the national interest".

Trump is separately set to sign the spending legislation approved by Congress that funds the government through the end of September and prevents another shutdown set to begin on Saturday.

The fight over the funding of the border wall between the White House and congressional Democrats led to the record-breaking 35-day federal government shutdown which ended late January.