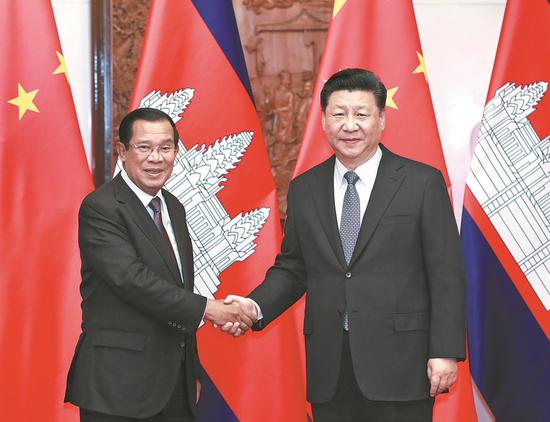 China and Cambodia should speed up connecting the Belt and Road Initiative with Cambodia's development strategy, President Xi Jinping said on Monday.

Xi made the remark while meeting with Cambodian Prime Minister Samdech Techo Hun Sen at Diaoyutai State Guesthouse in Beijing.

Noting that last year marked the 60th anniversary of the establishment of China-Cambodia diplomatic relations, he said bilateral ties have developed at a high level.

The two countries have made deep and practical progress in jointly building the Belt and Road, Xi said, adding that China and Cambodia have maintained close communication and coordination on global and regional affairs.

China would like to make joint efforts with Cambodia, move toward the goal of building a strategic community of a shared future, set the major areas of cooperation and map out the blueprint for development, Xi said.

The president pointed out that China supports Cambodia in upholding a development path that fits the country's own situation.

China and Cambodia also should focus on cooperation in such areas as politics, economy, security and people-to-people exchanges, Xi said.

The two countries should maintain high-level exchanges, enhance exchanges of governance experience and deepen cooperation under multilateral frameworks including the United Nations and the China-ASEAN mechanism, he added.

Hun Sen told Xi that he visited a major exhibition of China's reform and opening-up achievements in the past 40 years, and that he was deeply impressed by China's achievements.

He said he's glad to see that the Cambodia-China traditional friendship and comprehensive strategic cooperation have been strengthened continuously.

The Cambodian prime minister expressed gratitude for China's support and help for his country.

Cambodia would like to jointly build the Belt and Road with China and enhance cooperation in such areas as agriculture, trade, investment, tourism and infrastructure, he said.

The two countries should enhance law enforcement and security cooperation, strengthen communication on global and regional affairs, and continue to support each other on issues related to major concerns, Hun Sen said.