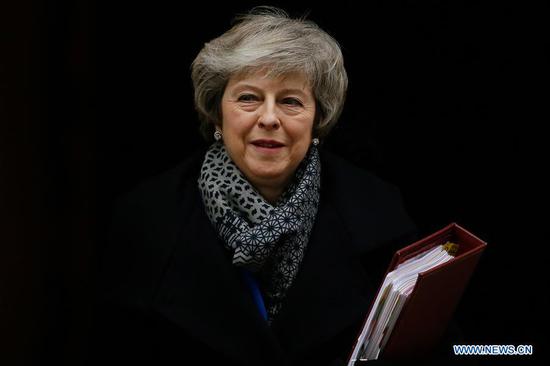 British Prime Minister Theresa May won a confidence vote in the House of Commons Wednesday, averting any immediate risk of an early general election.

The vote of no-confidence, put forward by the main opposition Labour leader Jeremy Corbyn, was lost by 325 votes to 306. It meant the government survived by just 19 votes.

It means May is now on course to continue seeking parliamentary backing for a Brexit deal to enable Britain to leave the European Union (EU) later this year. May will return to the House of Commons on Monday to present MPs with an alternative Brexit plan in the hope it has more success than the deal rejected Tuesday by a massive margin of 432 votes to 202.

Corbyn told May in a six-hour debate before the vote that if a government could not get their legislation through Parliament, they must go to the country for a new mandate. The move was backed by opposition parties at Westminster, apart from the Democratic Unionist Party (DUP) who supported May.

"The prime minister has lost control and the government has lost the ability to govern," said Corbyn, describing May as leader of a "zombie government".

Corbyn said every previous prime minister in the same situation would have resigned and called an election.

May, in her speech, said a general election would be the worst thing Britain could do.

"At this crucial moment in our nation's history, a general election is simply not in the national interest," she said.

"We are living through a historic moment in our nation's history. Following a referendum that divided our nation in half, we dearly need to bring our country back together," May added.