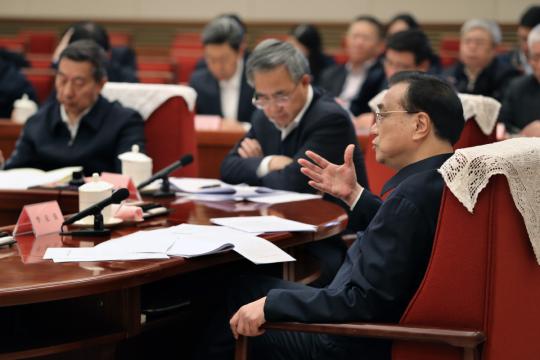 Premier Li Keqiang meets with economists and entrepreneurs in Beijing on Tuesday to gather opinions and suggestions on the draft Government Work Report. (Photo by Wu Zhiyi/China Daily)

Premier Li Keqiang called for increases in effective investment at reasonable levels, including public services and infrastructure, to encourage domestic consumption when China faces increasing downward pressure on its economic growth this year.

The premier made the statement during a meeting of the State Council, the Cabinet, on Tuesday to solicit opinions from economists and entrepreneurs on the draft of the Government Work Report, which he will deliver to the annual session of the National People's Congress in March.

Li said stimulating market vitality is crucial to coping with the pressure on the economy and also a significant part of China's reforms. The voices of market entities must be heard while China builds a fair-competition business environment and proceeds with the administrative streamlining, he said.

Arbitrary inspections of enterprises must be prevented to ensure their normal operation and production, Li said.

The premier called for inclusive and structural reduction of taxes and fees to help private, small and micro enterprises in getting financing and solving other problems, making millions of market entities more active and competitive.

Innovation-driven development should be strengthened along with the efforts to break through in key and cutting-edge technologies, Li said. Business startups and entrepreneurship should be promoted continuously to cultivate new drivers of the economy, transform traditional industries and expand employment, he said.

Li said preparations should be made to tackle difficulties and challenges arising from increasing downward pressure this year. He said supply-side structural reform should be deepened to accelerate the transformation of China's development model from heavy reliance on traditional paths. Macroeconomic regulation should be innovated with varied policy tools, including targeted regulation, he said.

External uncertainties should be hedged with stability and effectiveness of China's macroeconomic policies to keep the economy within a reasonable range and promote high-quality development, the premier added.

Yu Yongding, a senior economist at the Chinese Academy of Social Sciences, was one of the six speakers at the meeting.

Yu suggested infrastructure investment should be increased to keep the national economy stable, which would benefit advancing long-term structural reforms.