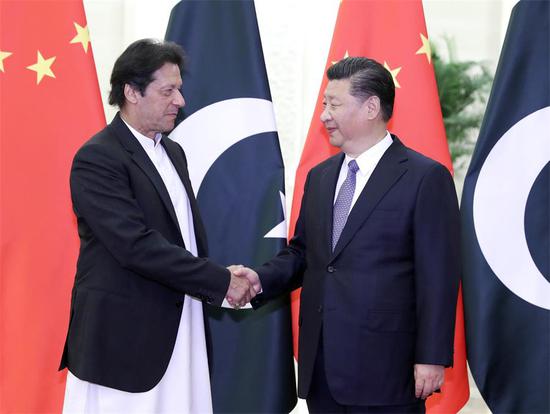 President Xi meets with visiting Pakistani Prime Minister Imran Khan at the Great Hall of the People in Beijing. (Photo/Xinhua)

Both countries should strengthen all-weather cooperation, he says

China is ready to work with Pakistan to strengthen their all-weather strategic cooperative partnership and advance the construction of the China-Pakistan Economic Corridor, President Xi Jinping said on Friday.

Xi made the remarks in a meeting with visiting Pakistani Prime Minister Imran Khan at the Great Hall of the People in Beijing.

He hailed the bilateral relationship as a special friendship formed and developed by the two countries through long-lasting mutual support and close cooperation, saying the relations keep growing with strong vitality regardless of any changes in the international or domestic landscape.

The China-Pakistan partnership not only benefits the two peoples but also promotes peace, stability and development in the region as well as the world, the president said.

Xi said he appreciated Khan's position of continuing to take relations with China as the foundation of Pakistan's diplomatic policy as well as his firm determination to advance construction of the economic corridor.

He emphasized that China has taken Pakistan as a priority in its diplomatic relations, supported the safeguarding of its national independence, sovereignty and territorial integrity, and backed the new government in enhancing governance.

Xi called on the two countries to deepen strategic communications, maintain lead­ers' frequent mutual visits and meetings, and strengthen exchanges in the experience of state governance.

The two sides should develop even closer pragmatic cooperation by boosting trade and investment and consolidating the early harvest projects of the CPEC, he said, adding that they also should expand cooperation on the economic corridor into the industrial park and social well-being sectors.

Xi also called for bilateral cooperation in counterterrorism as well as coordination on multilateral platforms such as the United Nations and the Shanghai Cooperation Organization.

Khan is in China for an official visit, the first since he took office in August. He will hold talks with Premier Li Keqiang and attend the first China International Import Expo, which will open in Shanghai on Monday.

Echoing Xi, Khan called China an all-weather strategic cooperative partner for Pakistan, and said his country remains committed to deepening relations with China and advancing CPEC construction so it can contribute to Pakistan's socioeconomic development.

Pakistan is ready to continue close communications and coordination with China on multilateral affairs, Khan said.

Observers said Khan's visit will further consolidate the traditional friendship between China and Pakistan, and also presents an opportunity for the leaders of the two countries to chart the course for the future of the partnership, particularly regarding how to surmount difficulties in advancing the CPEC.

Li Qingyan, a researcher from the Beijing-based China Institute of International Relations, said China and Pakistan have strong complementarities in their economies and should firmly implement the CPEC projects, which will help Pakistan develop industry, create more jobs and boost exports.

Speaking to reporters on Thursday, Khan said CPEC has provided a great opportunity for Pakistan to bring in foreign investment and get out of its difficult economic situation.

Zhao Gancheng, an expert on South Asian Studies at the Shanghai Institute for International Studies, said the assertion that the CPEC is causing financial and debt problems for Pakistan is unreasonable, since the debts incurred by the CPEC account for a very small portion of the country's total debts.