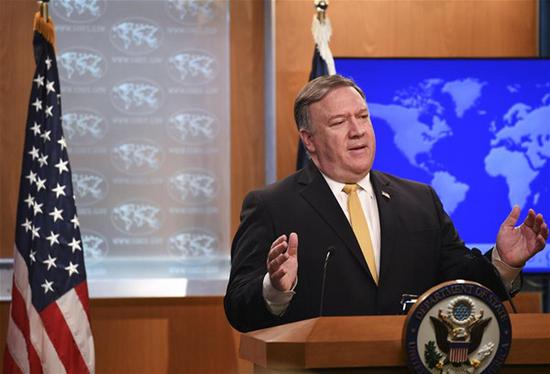 U.S. Secretary of State Mike Pompeo said in Washington on Wednesday that the United States is terminating the 1955 Treaty of Amity with Iran, after the UN's top court ruled that Washington lift sanctions on Tehran.

Pompeo said at a press briefing that "I'm announcing that the U.S. is terminating the 1955 Treaty of Amity with Iran. This is a decision, frankly, that is 39 years overdue."

It ordered Wednesday that the United States must lift sanctions on "medicines and medical devices, food and agricultural commodities" and on spare parts necessary for the safety of civil aviation imposed against Iran.

Iran had requested the ICJ to order an immediate lifting of all sanctions imposed by the United States, arguing that these "unjust and harmful" sanctions "are damaging the economy of Iran and driving millions of people into poverty," and that the U.S. side had violated a bilateral friendship treaty signed in 1955.

The lawsuit followed Trump's decision in May this year to quit the nuclear deal and restore sanctions on Iran. Iran started the ICJ proceedings on July 16.

Iran's Foreign Ministry welcomed the ICJ ruling, saying it proves "Iran's righteousness and U.S. illegitimate and oppressive sanctions," and Washington is isolated further due to its "wrong" policies vis-a-vis other independent countries.

Pompeo said that Iran is abusing the court for its own political and propaganda purposes.

"We're disappointed that the court failed to recognize that it has no jurisdiction to issue any order relating to these sanctions measures with the United States," Pompeo said, noting ran's claims under the treaty were "absurd."

He added that the United States would work to ensure its provision of humanitarian assistance to the Iranian people.

The treaty once helped establish economic relations and consular rights between the two nations.

Pompeo once again blamed Iran for the current security threat to the U.S. missions in Iraq.

"Our intelligence in this regard is solid. We can see the hand of the Ayatollah and his henchmen supporting these attacks on the United States," he said.

The U.S. State Department announced on Friday that it has decided to place its consulate in the Iraqi city of Basra on "ordered departure," citing increasing security threats from Iran.

Minutes later, Pompeo said that there were increasing threats to U.S. personnel and facilities in Iraq over the past several weeks, which he claimed came from the Iranian government, the Islamic Revolutionary Guard Corps Quds Force and related militias.

Pompeo threatened that the United States will "respond promptly and appropriately" to any attack on Americans or U.S. diplomatic facilities by Iranian forces.

The consulate in Basra in the southern part of Iraq is one of three U.S. diplomatic missions in the war-torn country.

Such attempts to shift the blame onto others would not erase the U.S. "destructive" role in Iraq, Foreign Ministry Spokesman Bahram Qasemi was quoted as saying by Tasnim news agency.

Washington has slapped a number of sanctions on Tehran after Trump announced the U.S. withdrawal from the landmark Iran nuclear deal despite strong opposition from the other signatories to the deal, namely Britain, France, Germany, Russia and China.

Trump said recently that the United States will impose "tougher than ever" sanctions on Iran after the punitive actions against the country slated for November this year.