DPRK says it needs trust in U.S. before denuclearization 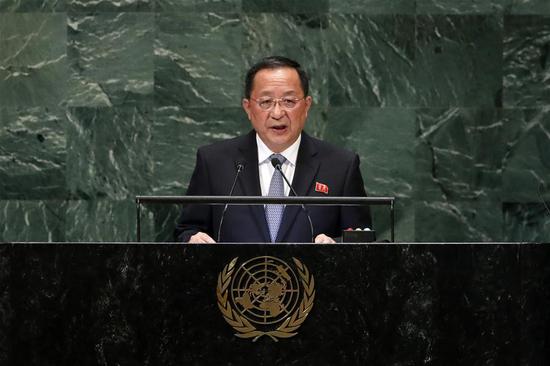 Ri Yong Ho, Foreign Minister of the Democratic People's Republic of Korea (DPRK), addresses the General Debate of the 73rd session of the United Nations General Assembly at the UN headquarters in New York, on Sept. 29, 2018. (Xinhua/Li Muzi)

The Democratic People's Republic of Korea (DPRK) on Saturday demanded the United States take steps to secure Pyongyang's trust before its denuclearization.

"Without any trust in the U.S. there will be no confidence in our national security and under such circumstances there is no way we will unilaterally disarm ourselves first," DPRK Foreign Minister Ri Yong Ho told the UN General Assembly.

"The DPRK government's commitment to denuclearization is solid and firm. However, it is only possible if the U.S. secures our sufficient trust toward the U.S."

The key to consolidating peace and security on the Korean Peninsula is to thoroughly implement the joint statement adopted at the historic summit between the DPRK's top leader Kim Jong Un and U.S. President Donald Trump in Singapore in June, said Ri.

The joint statement contains all principled issues regarding eventual solutions of the issues on the Korean Peninsula, he said. "Once the DPRK-U.S. Joint Statement is implemented, the current trend toward detente will turn into durable peace, and the complete denuclearization of the Korean Peninsula will also be achieved."

The primary task for effectively implementing the joint statement should be bringing down the barrier of mistrust between the two countries, said Ri.

Out of the desire and resolute determination to successfully implement the joint statement, the DPRK government gives particular attention to trust-building and is pouring primary efforts to this, he said.

Even before the summit, DPRK took significant good-will measures such as stopping nuclear and ballistic missile tests and dismantling a nuclear test site, said Ri. "However, we do not see any corresponding response from the U.S. On the contrary, instead of addressing our concern for the absence of peace regime in the Korean Peninsula, the U.S. insists on 'denuclearization-first' and increases the level of pressure by sanctions to achieve their purpose in a coercive manner, and even objecting the 'declaration of the end of war'."

"The perception that sanctions can bring us on our knees is a pipe dream of the people who are ignorant about us. But the problem is that the continued sanctions are deepening our mistrust."

If the joint statement becomes a victim of the domestic politics of the U.S., then the greatest victim of the subsequent unpredictable consequences will be the U.S. itself as a whole, Ri warned.

At this critical juncture, the U.S. should make a foresighted judgment that faithful fulfillment of its commitment will, in the end, be in the best national interests of the United Sates and should maintain new method for solving the DPRK-U.S. relations, he said.

Speaking before a meeting with South Korean President Moon Jae-in in New York on Monday, Trump announced that himself and Kim will hold a second summit "in the not too distant future."

After a meeting between U.S. Secretary of State Mike Pompeo and Ri on the sidelines of the UN General Assembly on Wednesday, the State Department announced that Pompeo will travel to the DPRK to discuss the second Trump-Kim summit.

In his speech at the UN General Assembly on Tuesday, Trump thanked Kim "for his courage and for the steps he has taken." But he added that much work remains to be done and that the sanctions against the DPRK will stay in place "until denuclearization occurs."