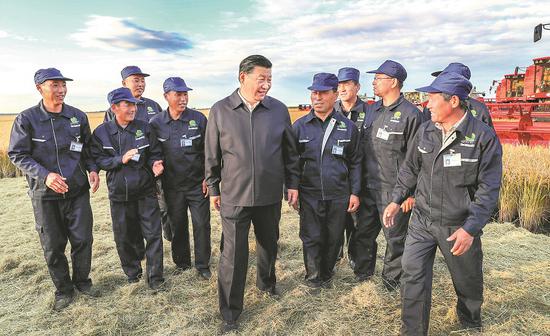 President Xi Jinping talks with workers at a State-owned farm in Jiansanjiang, Heilongjiang province, on Tuesday, the first day of his inspection visit to the province. He had detailed talks with farmworkers and managers on production and management. (Photo/Xinhua)

President Xi Jinping underlined the importance of self-reliance in food security, the real economy and manufacturing on Wednesday as the country faces rising unilateralism and trade protectionism internationally.

Xi, also general secretary of the Communist Party of China Central Committee, said during a field inspection to Heilongjiang province that unilateralism and trade protectionism are forcing China to take a path of self-reliance, which, he said, “is not a bad thing”.

It is becoming increasingly difficult to gain access to leading technologies and key technologies internationally, and China will ultimately rely on itself, Xi said.

As a major country of close to 1.4 billion people and with an area of 9.6 million square kilometers, China should rely on itself in key areas, he said.

Xi noted that the country is closer than ever to making its two centenary goals a reality. Yet the last leg of a journey can be the most demanding part, and it has never before met so many challenges and difficulties as now.

Equipment manufacturing is the pillar of the nation as well as an important component of the real economy, he said. It is important for the sector to leverage its strengths, seize opportunities to become stronger, do better and grow bigger.

He added that the country’s emphasis on high-quality development and building the Belt and Road has brought opportunities that ma­nufacturers must seize to improve capacities and continue with reform and innovation.

Xi urged staff workers to take the historic responsibility, work out a good map for development and enhance Party leadership. He also underscored the importance of improving management and stimulating the enthusiasm of talent to innovate and start new businesses.

Wednesday was the second day of Xi’s inspection tour. On Tuesday, he visited a large State-owned farm in Jiansanjiang, near the border with Russia.

At agricultural machinery centers and rice paddies, he held detailed talks with farmworkers and managers on production and management.

He stressed the importance of ensuring China’s food security so that the country can always control its own food supply. Agriculture is a fundamental sector, and China’s modernization cannot be achieved without agricultural modernization, he said. Revitalization of agriculture should rely on science and technology as well as talent, he said.

Xi also highlighted the importance of improving soil quality, which he said cannot be allowed to degrade. Green development should also be sustainable, and agricultural production should not focus only on short-term benefits.

The State-owned farm is the way to go as the country reforms its land reclamation sector, and reforms should further stimulate the initiative of farmworkers, protect their interests and help them improve their skills, he said.

Also on Wednesday, the CPC Central Committee and the State Council released the full text of the Plan for Rural Vitalization Strategy (2018-22). The strategy highlights striking instability and uncertainties in the international trade of agricultural products, and pressing tasks to properly cope with risks in international markets and improve the competitiveness of the country’s agriculture.